Claim it will lead to commercialisation, concretisation of forest area 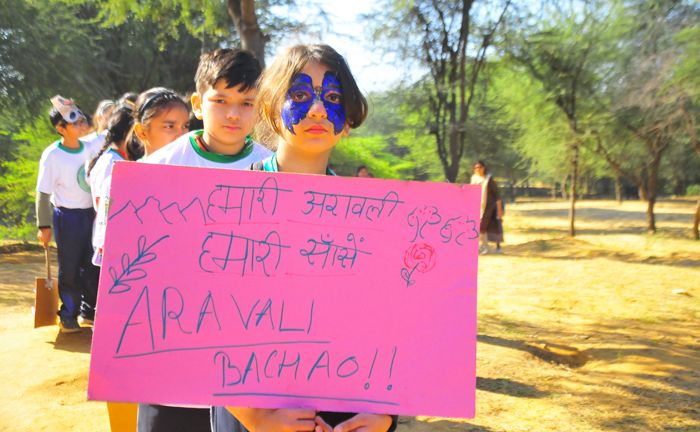 Children take out 'Save Aravallis' march near Gurugram. S Chandan

Environment activists under the Aravalli Bachao Citizens Movement in a letter to Chief Minister (CM) Manohar Lal Khattar have objected to the proposal of building a fence around 10,000 acres for the Aravalli safari park project.

The conservationists also appealed to not to proceed with the construction of concrete structures and cages in the Aravalli. They claimed that these structures would cause fragmentation of wildlife habitats.

The environmentalists have accused government of prioritising revenue generation rather than conservation of ecosystem and shrinking forestland. The activists fear that the construction of infrastructure for the park will lead to commercialisation and concretisation of the forest area.

The letter read, “The project in its current avatar must be scrapped. The fragmentation of wild habitat by fencing would adversely affect flora and fauna, especially big cats such as leopards. The Transport Department talks about erecting clubs, restaurants, cable cars, aquarium, open air theatres, entertainment parks, gardens, electricity lines and road networks to turn the area into a tourist hub. This project shouldn’t be allowed in current form.”

A conservationist, Prerna Bindra, who was a member of the National Board for Wildlife, said, “The construction envisaged under the project will result in unnecessary real estate development, which will destroy the ecology of the Aravallis. The increase in tourist footfall will lead to rise in vehicular traffic, water usage and waste generation. These factors will aggravate the fragile ecosystem of the area, which is already at risk due to mining.”

A project of this nature wouldn’t support conservation but will undermine the ecology and hydrology of the area, she added. The National Green Tribunal had recently imposed a fine of Rs 100 crore on the state government for continued ecological damage to the Aravallis due to mismanagement of the Bandhwari landfill.

Another conservationist Dr Rajendra Singh, who is known as Waterman of India, said, “More waste will be created in the area due the project. In its present form, the project aims to commercialise the Aravallis. It will affect the entire NCR region. The mountain range regulate climate, ensure groundwater recharge and act as barrier against desertification in the NCR.”