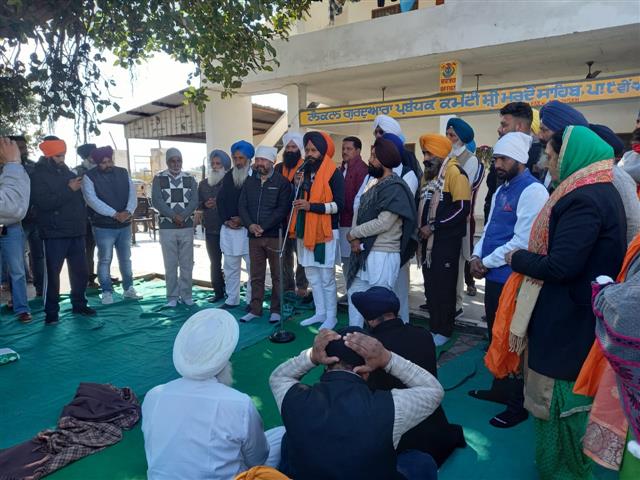 Farmers during a kisan mahapanchayat at Mardon Sahib Gurdwara in Ambala on Saturday.

Unhappy with the call of “Mission Punjab” given by Gurnam Singh Charuni, several activists and office-bearers had quit the union, following which Charuni also had to rejig his union in Ambala last month.

A kisan mahapanchayat was held at Mardon Sahib Gurdwara in Ambala to decide the future course of action today. The farm leaders said to continue farmers’ struggle and create their identity they have to form a new outfit as their ideology was not matching with that of Charuni.

Mohri said: “Farmers were not happy with the move of contesting elections. We tried to persuade them but to no avail, so we decided to part our ways. Today, we have floated a new union and it will remain apolitical. It will motivate the youth and educated people to join them and fight for the welfare of farmers. We want to change the style of protest. We want the educated people to join the union so that farmers’ issues could be raised in an effective manner, instead of just focusing on blocking roads and having arguments with politicians.”

“The union will make the government fulfil its poll promises. Soon we will expand our union in other districts for which a campaign will be run. People from other unions are also joining us,” he added.

Meanwhile, Rakesh Bains spokesman BKU (Charuni) said: “There can be a difference in the ideology but the motive is same. Both the unions will continue to raise farmers’ issues and we will congratulate the new outfit.”

Say no to polls