Agnipath protests get violent in Palwal 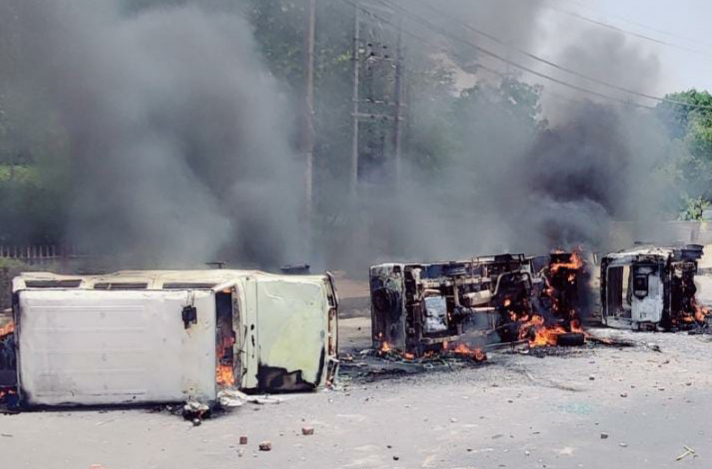 Thousands of young armed forces aspirants took to the streets in south Haryana today against the recently announced Army recruitment scheme Agnipath. While the protesters turned violent in Palwal, they blocked roads in surroundings districts.

Scattered protests and blockage of roads took place in Gurugram, Hodal, Rohtak and Charkhi Dadri. The police had to resort to mild lathi-charge in Rewari.

Shouting slogans of ‘arthi ya vardi’ (corpse or uniform), the protesters, who according to the police, also included anti-social elements created chaos in Palwal. They attacked the DC office, DC residence, burnt five police vehicles, damaged many public transport vehicles and injured around 20 policemen, administration and mediapersons.

Only when the police used force did they retreat. The police had to retort to mild lathi-charge, aerial firing and tear gas to control the situation.

The drama started around 10.30 am when Army aspirants gathered to protest against Agnipath near the rest house near the old court.

When the local police tried to stop them, they went on the rampage and attacked the DC’s residence. They pelted stones, injuring the staff on security duty.

The protesters then went on to burn three police vehicles, damaging other vehicles on the highway and the media centre. The police had to seek help from the Faridabad police and Nuh police to bring the situation under control.

In three hours, 12 protesters were detained. According to acting SP Mukesh Malhotra, two SHOs and 15 other policemen were seriously injured and five vehicles were burnt.

What the order reads

“The suspension is in view of the potential law and order situation created on account of the new Army Recruitment Policy. There is a likelihood of causing tension and danger to human life and property in Palwal. The suspension has been imposed to stop the spread of disinformation,” read the orders.