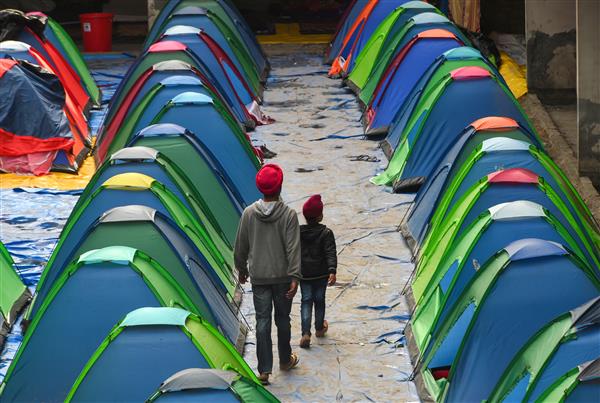 The All India Kisan Sangarsh Coordination Committee has accused governments of Haryana and Madhya Pradesh of using force to repress protests against the controversial agriculture laws---a statement that comes as the agitation shows no signs of waning.

In a statement issued on Monday, the AIKSCC was accused Haryana and Madhya Pradesh governments of trying to stifle peaceful protests. The statement said Haryana police’s use teargas to push back protesters marching towards Delhi in Haryana’s Rewari on Sunday was an act of “severe repression” and warned that protests would intensify if the state government continued to use force.

“Yesterday farmers who had advanced towards Delhi from Shahjahanpur in a peaceful manner were physically obstructed and later tear gassed in Rewari along with spray of chilly. This has left several farmers with weeping eyes and skin irritation,” the statement said.

It accused Madhya Pradesh government under Chief Minister Shiv Raj Chouhan of using section 144 of the Criminal Procedure Code to “undemocratically and illegally” ban assembly throughout the state in the name of COVID-19, “while all mass activities of the governments and RSS, BJP continue unhindered”.

Both Haryana and Madhya Pradesh have BJP governments.

The statement was also critical of the Congress government in Punjab, especially in the light of a recent incident of clashes between farmers and police in Sangrur. The statement accused the Congress government of using batons to push back protesters at a BJP event in Sangrur, and also criticised senior BJP minister Nitin Gadkari over his recent remarks over the protests.

Gadkari had said on Sunday---a day before another round of talks were scheduled---that India had surplus food and higher-than-open-market price MSP.

“Fact is India has a huge starving population, the RSS-BJP govt is insensitive to their needs. Those whose stomachs are full believe that India should produce less food. India’s position in list of hungry countries is sinking every year. Its score for Hunger was 38.8 in 2000 which has come down to 30.3 in 2019 and 27.2 in 2020. Oblivious of this and devoted to support corporate loot, uncaring Ministers are stating we have surplus food,” the statement said.

“The entire debate of open market versus MSP is a far cry from Modi’s claim of standing with farmers. All countries of the world heavily subsidise farming in order that overall crop prices remain low. In India the ministers, dedicated to help corporate purchase of cheap crops to earn high profits, say that the sale should be through open markets, not at MSP.”

The All India Kisan Sangarsh Coordination Committee called Reliance Industries affidavit in the Punjab and Haryana High Court “a ploy to serve its business interests”.

“Given under pressure of farmers’ anger against it, the Reliance Industry’s affidavit is full of false claims of it not entering crop market and not taking over farm land. In Raigarh, Maharashtra and other places large tracts of land have been taken over by Reliance and it must return all these before making any false claim,” the statement said.

“The campaign against Ambani and Adani products and services taken up by mass organisations is akin to the Boycott of British goods during British rule.”