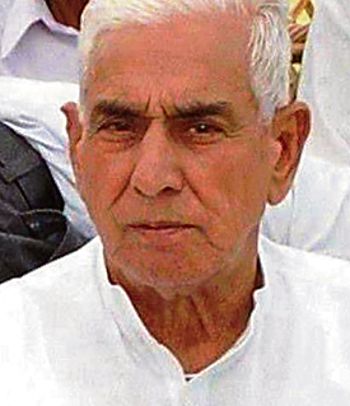 Ramji Lal, former Rajya Sabha MP and an aide of former Chief Minister Bhajan Lal, died in Hisar today. He was 90. He was cremated at his native Arya Nagar village.

Deputy Speaker in Haryana Assembly Ranbir Singh Gangwa and Congress MLA Kuldeep Bishnoi were among the prominent people who paid their last respects to the leader.

Ramji Lal was a two-time Rajya Sabha member from the Congress during the tenure of Bhajan Lal as the Chief Minister of the state.

Ramji Lal had been ailing for some time and breathed his last at his residence in the morning today.

He was elected to the Rajya Sabha in 1992. However, he resigned from the Rajya Sabha on the advice of the then Chief Minister Bhajan Lal and was assigned party work. A political observer informed that he was asked to resign to adjust a Union Cabinet minister whose Rajya Sabha term was set to expire soon. The then Prime Minister Narsimha Rao asked Bhajan Lal for a vacancy after which Ramji Lal resigned to create a vacancy in the Rajya Sabha.

He was again nominated for the Rajya Sabha seat and was successfully elected two years later in 1994 and completed his term.