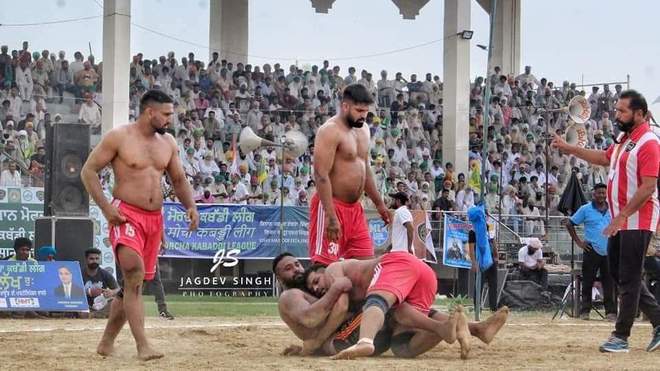 Players in action during a kabaddi tournament at the Singhu border on Saturday. Tribune photo

The Samyukt Kisan Morcha (SKM) claimed that various organisations, associations and political parties had extended their support to the Bharat Bandh call on Monday.

SKM leaders claimed that preparations to make the bandh a success were in full swing. Besides, the kabaddi teams reached the Singhu border for three days. The competition is being organised by khap panchayats in support of the farmers’ protest.

Farm leaders Rakesh Tikait, Harinder Singh Lakhowal along with others reached the venue near Parker Mall to encourage the kabaddi players as well as the protesters. The SKM leaders said more support was pouring in for the bandh. Left political parties had already extended their unconditional support to the SKM call. Besides, other political parties — RJD, NCP, Kerala’s ruling LDF, Jharkhand Mukti Morcha, Telugu Desam Party, DMK — have also backed the bandh call.

The Federation of Private Schools Associations of Punjab as well as Haryana have announced that the institutions would remain closed on Monday. Bar Associations in different towns are also announcing the suspension of work on Monday.

Moreover, supporters of the farmers’ stir held protests in the US during PM Narendra Modi’s visit. The supporters protested outside the White House.

The SKM said a kisan car rally was being organised in Sacramento, California, to back the farmers. There are also protests planned in the UK, London, Birmingham, Dublin and Glasgow on Monday along with Dublin, Ireland.