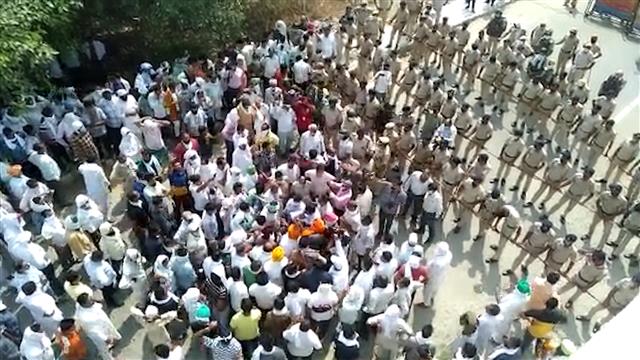 After back-to-back FIRs were registered against Bhartiya Kisan Union (Charuni) leaders in Ambala and Kurukshetra, the farmer union has called a state-level meeting at Kamboj Dharamshala in Kurukshetra on Saturday to chalk out its further strategy and to intensify the protest.

Three FIRs (one in Kurukshetra against Gurnam Charuni for promoting enmity after he gave the call of burning the PM’s effigy on Dasehra and two in Ambala against BKU leaders under murder charges and blocking a national highway in Naraingarh) were registered this week after the BKU leaders held a protest during a tractor rally of the BJP.

BKU chief Gurnam Singh said, “Earlier, the government registered FIRs under attempt-to-murder charges after the Pipli incident and now, it has started booking farmers under murder charges as well. This is not acceptable. The BJP has been trying to take advantage of the death of its own party worker. It was clear in the videos that no one attacked Bharat Singh and he died due to heart attack. He was a heart patient. Wrong allegations are being levelled against the farmers, but the government can’t suppress the voice of farmers by registering fake FIRs.

“A state-level meeting has been called to discuss the issue. Besides this, we will also chalk out the strategy for the Dasehra event in which we have given the call for burning effigies of Prime Minister Narendra Modi, local BJP leaders and supporters at the block level and a ‘chakka jam’ on November 5,” he added.