Budget after talks with all stakeholders, says Khattar 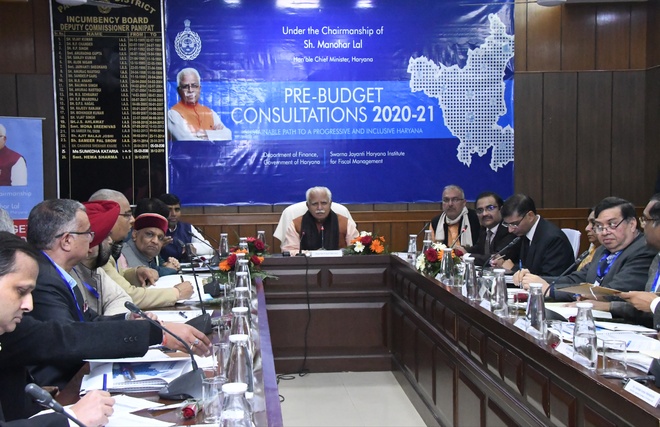 Chief Minister Manohar Lal Khattar on Tuesday said that the state government is going to present its Budget 2020-21 next month. “Before presenting the Budget, we will consult all important stakeholders. After considering everybody’s opinion, we will present the Budget,” he said.

Industrialists from Panipat, Karnal, Sonepat, Yamunanagar and Bahadurgarh raised their problems and gave suggestions in the meeting with the CM.

While interacting with mediapersons after a two-and-half-hour meeting with the industrialists, Khattar said that Budget 2020-21 would not only be for all, but also by all and it was his responsibility as Finance Minister to present a good Budget. “For the first time in the state, we have decided to consult important stakeholders of the Budget and this was the second meeting,” he said.

Two more such meetings would be held at Faridabad on Wednesday and with agriculture and service stakeholders at Hisar on January 16, the CM said.

After discussing with all major stakeholders, the Budget would be discussed in the Assembly with the MLAs for three days. After considering everybody’s opinion, we would present the final Budget, the CM asserted.

TVSN Prasad, ACS Finance Department, briefed about the pre-Budget consultation through a presentation at the meeting.

Sanjay Bhatia, MP from Karnal; MLA Mahipal Dhanda; DC Hema Sharma; SP Sumit Kumar along with other officers of the district administration were present during the meeting.

Ramesh Verma, president, Handloom Exports Manufacturing Association, suggested the development of a separate industrial sector in Panipat as there are around 18,000 handloom industries here. He also demanded the establishment of a lab-testing centre and exhibition centre.

Bheem Rana, president, Panipat Dyers’ Association, suggested the supply of treated water from STP to the dyeing industries and also suggested the establishment of a common boiler project and Zero Liquid Discharge (ZLD) plant at Panipat.

The Chief Minister has assured the industrialists that the textile policy would be implemented after the Budget session.