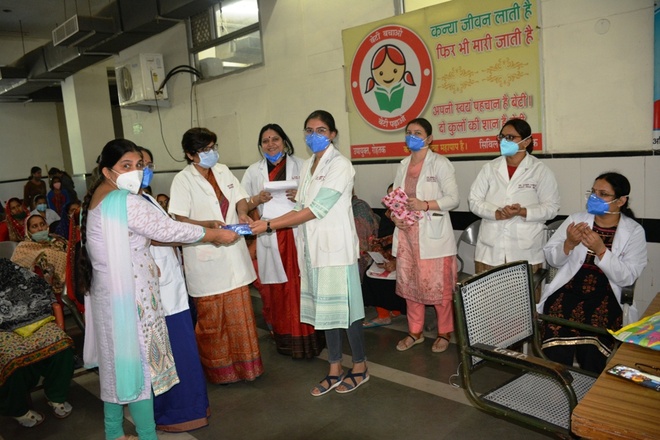 Rohtak: The Department of Gynaecology and Obstetrics at Pt Bhagwat Dayal Sharma University of Health Sciences (UHS) here organised an awareness programme on prevention, treatment and elimination of cervical cancer as part of a drive launched by the World Health Organisation. Head of the Department Prof Smiti Nanda presided over the event while Dr Vani Malhotra convened the programme. Role play by postgraduate students of the department, poem recitation and poster presentation marked the event. Four cancer survivors from across the state also attended the session.

Faridabad: In a relief to the students of Echelon Institute of Technology by JC Bose University of Science and Technology, YMCA here, another chance is being provided to them to submit their examination forms in the university. The last date of submission of form for the semester examination to be held in December is November 22. The chance is being provided in the interest of students on a request by Abhibhawak Ekta Manch, Haryana, received through Deputy Commissioner, Faridabad, recently, said a spokesperson of the university. He said EIT had been lying disaffiliated since October 2019 due to technical issues. He said the assessment of semesters and progression of students in next semesters of EIT Faridabad are held up due to non-submission of examination forms by EIT Faridabad which were issued by the university in March. In its request, Abhibhawak Ekta Manch, Haryana, had mentioned that the university had recently issued the schedule for filling up the examination forms for next semester examination, but EIT students could not fill the said forms because of non-filling of forms previously. The Manch had requested that the forms of students be accepted by the university.

Karnal: The National Academy of Agricultural Sciences (NAAS) organised a brainstorming session on “Utilisation of wastewaters in urban and peri-urban agriculture” in virtual mode under the chairmanship of Dr T Mohapatra, NAAS president and DARE & DG ICAR secretary. Dr AK Singh, NAAS secretary and ex-VC Rajmata Scindia Agricultural University, Gwalior, welcomed the participants and briefed the objectives of the session. Dr Mohapatra emphasised the importance of subject on agriculture when most of the people are rushing towards cities for their livelihood and better life-expectations. “We are facing scarcity of water at one hand and generating about 61,754 million liter of sewage water per day, which is not utilised economically,” he added. Dr JC Dagar, former ADG, ICAR, and convener of the session who hails from Karnal, emphasised that instead of facing problems of disposal causing serious land, water, air and food pollution, water can be judiciously used in innovative horticulture, agro-forestry, development of lawns/gardens/green-belts/landscapes, vertical farming, dairy and poultry units in peri-urban areas, rooftop cultivation, growing avenue trees and ornamental plants in open spaces, cultivation of aromatic and ornamental plants and aqua-culture by developing low-cost technologies.