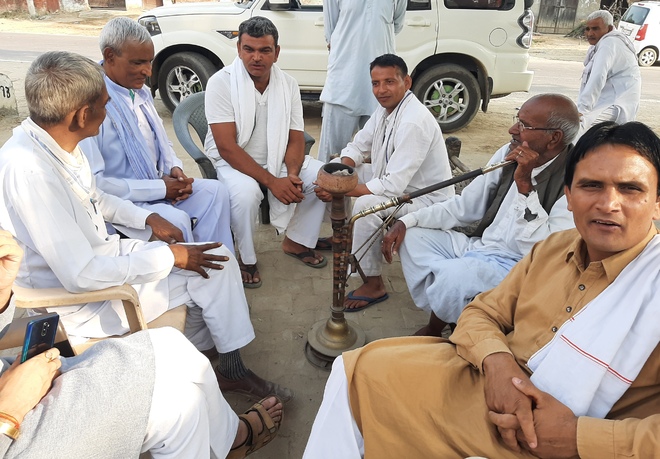 Bhanderi villagers hold a discussion on the Baroda bypoll.

The high-voltage campaigning for Baroda byelection, scheduled for November 3, ended on Sunday at 6 pm.

The campaign was marked by aggressive blitzkrieg between BJP-JJP and Congress. The INLD too left no stone unturned to make the contest triangular.

At the end of the campaigning, the election battle reached an interesting stage and the villagers expect a tough contest.

Though campaigning has ended, all 54 villages of Baroda constituency could be seen coloured in electoral shades. Be it a tea stall or a village ‘chaupal’ or a turn of a village street or a chowk in the village, small groups of people can be seen talking about the elections.

People whose houses are along the village roads offered chairs and cots to the visitors and offered hookah and drinking water to everyone whether they knew them or not.

The only topic of discussion was the bypoll. Some are praising the Congress while others are backing the BJP-JJP. Some could be seen talking about the INLD too.

As The Tribune team reached Madina village on Meham road, some youths –- Shyam Lal and Pradeep Malik of Madina and Kuldeep of Kathura village — were standing at a tea stall on a road and talking about the election.

They said that in the beginning, the Congress had an edge but in the past three-four days, the campaign of the BJP was boosted and now, the contest has reached an interesting point.

After that, the team reached Bhanderi village on Meham road where a group of people were sitting and discussing the election at Satyawan’s home. Meanwhile, some people reached there in a SUV and they immediately offered them hookah and drinking water. Satyawan said that people have made up their mind whom to vote for but they are keeping their cards close to their chest.

Hira Lal (82) said that a good contest between the BJP and Congress candidates was expected.

In Kathura village, the village of Kapoor Singh Narwal who withdrew his nomination in support of Congress candidate Induraj Narwal, people were sitting at Mahavir’s house and discussing the electoral battle.

Mahavir said that villagers are with Kapoor Singh Narwal. Induraj’s surname is also Narwal. So, most voters in the village would go with the Congress candidate.

In Baroda village, a group of villagers were seen discussing the campaign and the policies of the Congress and the BJP government. Subhash and Rampat of the village said that there was a keen contest between BJP-JJP coalition candidate Yogeshwar Dutt and Congress candidate Induraj Narwal.

“We won’t give a clean sweep to any candidate. We are expecting a good contest,” said Subhash. “Besides, if INLD candidate Jogender Malik does well, it will hurt the Congress candidate,” they said.