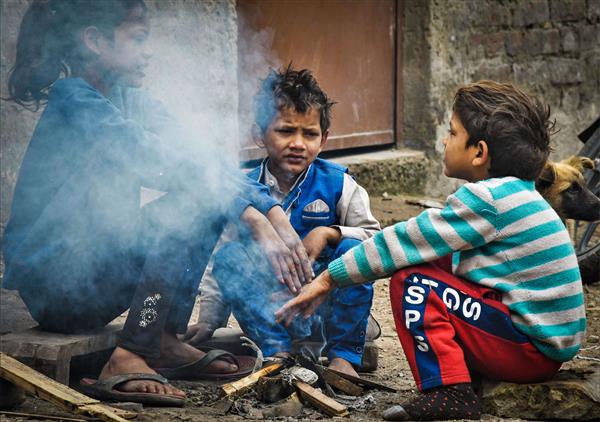 Children warm themselves near a bonfire during a cold winter day, at a village on the outskirts of Chandigarh. PTI photo.

The Haryana Government has announced that schools will be closed in the state on December 30-31 as a cold wave continues to sweep most parts of Haryana and Punjab.

“Due to intense cold wave in the state/region government has declared holiday on  December 30 and 31 in all the private and government schools in the State… These orders be strictly adhered to,” a circular from Haryana Government’s Directorate of School Education said on Sunday.

The circular said that the schools would reopen on January 16 after the winter break.

There was no let-up in the freezing cold sweeping Haryana and Punjab, where Hisar was shivering at 0.2 degrees Celsius.

As the cold wave further tightened its grip, Chandigarh recorded the season’s coldest night of the season so far at 2.9 degrees Celsius, a Meteorological Department official said here.

Among other places in the region which were under the grip of bone-chilling cold included Narnaul, Sirsa and Rohtak, where night temperatures settled at 1.5 deg C, 1.8 deg C and 1.6 deg C, respectively.

Karnal, Bhiwani and Ambala, too, were under the influence of piercing cold recording respective minimums of 3.8 deg C, 3.3 deg C and 3.7 deg C.