More than 1,000 traffic police personnel deployed across the city 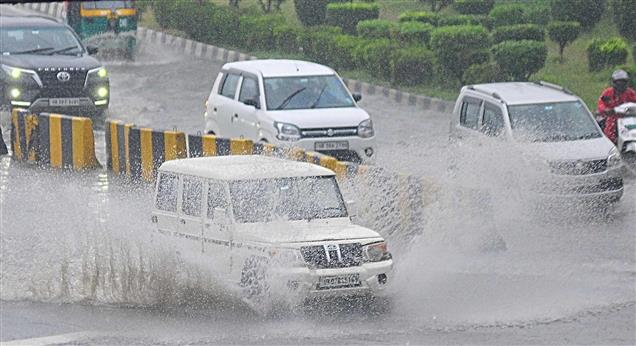 Continuous heavy rain in the city led to waterlogging and traffic snarls at major locations on Thursday. The police struggled to decongest the main carriageway and service lanes almost for the entire day.

“Due to continuous heavy rain in Gurugram, there is waterlogging at some places and the traffic is moving at a slow speed. Therefore, we request all of you that they should come out of the house only when necessary. Sorry for the inconvenience,” read the traffic police advisory, issued for the general public through its twitter handle.

According to the Gurugram traffic police, the vehicular movement on Delhi-Jaipur National Highway remained slow at Narsinghpur, Rajiv Chowk, Signature tower flyover and Hero Honda Chowk due to waterlogging.

More than 1,000 traffic police personnel were deployed across the city soon after it started raining from morning around 8 am. The cops, in coordination with the civic authorities concerned, pumped out rainwater and managed to curb a major congestion in different parts of the city.

The cops deployed in PCR, riders, towing vans and earthmoving machines were at the key points, including Delhi-Gurugram expressway. According to the district administration, Gurugram on Thursday received 54mm rainfall, with Wazirabad recording the maximum at 60mm. The rainfall in Manesar recorded 50mm, Sohna 43mm, Harsar 54mm, Badshahpur 30mm, Pataudi 20mm and Farrukhnagar 29mm in the district till 5:00pm.

“Vehicle flow is smooth in larger parts of Gurugram so far though there is vehicle slowdown reported at some locations. All Traffic Staff has been directed to continue their duties until rain and traffic flow is normalised,” said Virender Singh Sangwan, DCP, traffic.

The police claimed they manage to clear traffic snarls, but the commuters face a hard time while going to work and returning home.

“While driving to the golf course extension road on Thursday morning, I was just opposite Good Earth mall for over half an hour. The stretch is in a bad condition and waterlogging adds to commuters’ woes,” said Jagdish Ahlawat, working with a private company.

“The stretch between Hero Honda Chowk and Narsinghpur service lane was affected the most on Thursday. I had taken the service lane and my car was stuck in the water. This stretch with waterlogging is really dangerous for the commuters,” said Jitender Dhillon, a resident of Sector 31.

The cops were on duty till filing of this report and the rain was also continued intermittently.