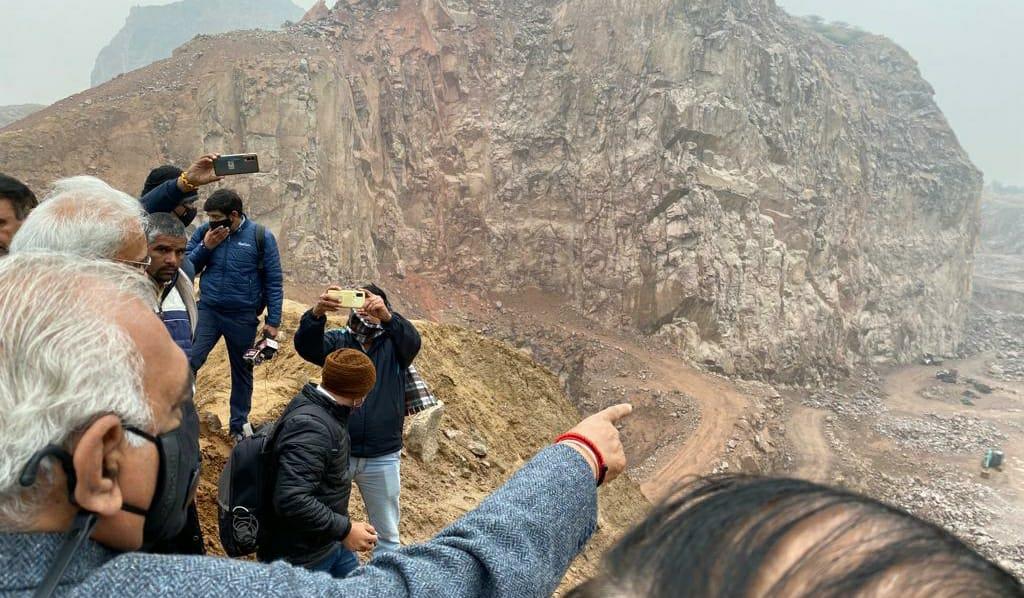 Leader of Opposition Bhupinder Singh Hooda at the landslide site in the Dadam mining zone on Wednesday. Tribune photo

Former Chief Minister and Leader of Opposition Bhupinder Singh Hooda on Wednesday said the state’s biggest scam involving thousands of crores of rupees happened in the Dadam mining zone, where five persons died in a landslide on January 1.

“The Dadam mining scam is the biggest in the history of Haryana. As per the evidences furnished by local villagers, illegal mining has been going on unabated in Dadam for several years now,” Hooda said after visiting the landslide site on Wednesday.

Villagers and social workers of the area submitted a memorandum to the former Chief Minister against the mining mafia, alleging that it had forcibly occupied the land of area residents and was carrying out the illegal practice there.

Hooda further said the mining mafia had turned the zone into a death trap and was putting the lives of poor labourers at risk.

Asserting that the special investigation team (SIT) formed by the government was not capable of probing such a big scam, the former Chief Minister demanded that the matter should be inquired by the CBI under the supervision of a High Court judge.

“Strictest action should be taken against the mining mafia and the culprits of this accident. A committee of the state Legislative Assembly should also be constituted to keep an eye on the mining activities from the Yamuna to Dadam,” he added.

Govt trying to save culprits

Despite the rules, vertical mining is being done and this is why the fatal mishap took place. The government is trying to save the culprits by registering a case under mild sections. — Bhupinder Singh Hooda, ex-CM