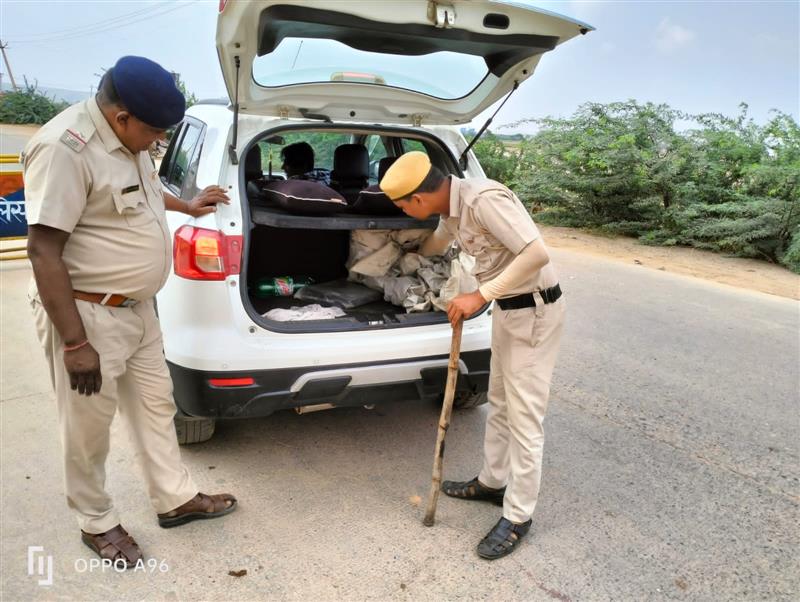 Cops at a naka set up on the Rajasthan border. Tribune photo

A day after being attacked by over 50 men while conducting a raid at an illegal mine, the Nuh police, along with the local Mining Department and Regional Transport Authority (RTA), have erected three checkpoints on the Rajasthan border and another one in Mewat village.

With strictness in Nuh, the mining activity has shifted to the border villages of Rajasthan. We will now curtail the menace of illegal dumpers coming from the neighbouring state. Varun Singla, Nuh SP

No concrete action has, however, been planned against the stone crushers, who are the root cause of illegal mining in the area.

A majority of the illegal stone crushers, which had shut after the Tauru DSP’s murder in July, are back in full swing. While the mining authorities and the police are cracking down on miners and dumpers, not much thought has been spared for the crushers that are running under the patronage of the who’s who of the state.

When contacted, Anil Kumar, new Mining Officer of Nuh, said they would check the crushers and take action in case of irregularities. So far, the Mining Department has fined only a few crushers and no major crackdown has been done. These crushers make profits by buying illegally mined stones.

Meanwhile, the police claim that while a mega-scale illegal mining has ended in Nuh, it was on in full swing in neighbouring Alwar. Nuh miners too have shifted base to Alwar.

The authorities now plan to tighten the noose on the influx of illegally mined stone in Haryana through overloaded and underweight dumpers. “We have set up three nakas on the border and a checkpost in Jhimrawat village, from where the reports of mining are being received. With strictness in Nuh, the mining activity has shifted to the border villages of Rajasthan. We will now curtail the menace of illegal dumpers coming from Rajasthan,” said Nuh SP Varun Singla.

The Tribune had highlighted the ongoing mining in the area and acting on the report, the police raided the site in Baded village and took three excavation machines into custody. The miners got on the hills and pelted stones at the cops, injuring one of them. The police have booked 50 persons and identified five of them so far. They have also identified the drivers of the excavation machines. The raid, however, irked the Rajasthan authorities, who accused the Haryana cops and mining officials of violating the jurisdiction.

“They should have informed us. The lack of coordination with us led to the attack. The machines taken are from Rajasthan,” said an official.

The SP further said while a part of the site might be in Rajasthan, all accused were from Nuh. “It was an illegal mining site and we had to act,” Singla added.