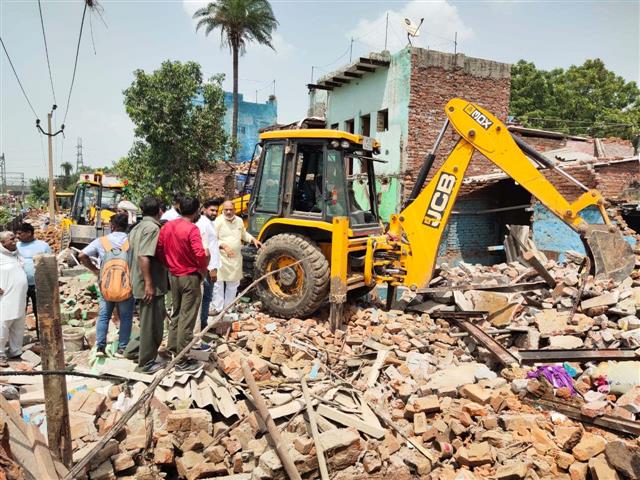 An illegal structure being demolished in Faridabad.

The district administration has chalked out a comprehensive demolition drive against illegal commercial constructions in colonies falling both inside and outside the civic limits in the city. The DC has appointed the DTP (Enforcement) as the Duty Magistrate for the purpose.

While the exact number of such constructions is yet to be determined as a survey is underway, the number could be in hundreds as the land mafia had been active on the outskirts of the city and in the neighbourhood of the unauthorised residential colonies and sectors.

Sources in the administration said while the exact number of such constructions is yet to be determined as a survey was under way, the number could be in hundreds as the land mafia had been active on the outskirts of the city and in the neighborhood of the unauthorised residential colonies and sectors.

There is no time limit of the drive as the main task of the DTP(E) is to check the illegal constructions and violations of the Urban Area Act, under which no construction is allowed without a licence or authorisation from the government. The department carried out as many as 41 such drives from January 1 to November 30, in which more than 400 unauthorised constructions in various forms, including houses, shops, walls, DPC and roads, in illegally carved out colonies were demolished, it is reported.

Describing it as an important exercise, DTP(E) Rajender Sharma said the drive would focus on illegal commercial and residential constructions both within and outside the MC limits. He said the department had been collecting information about such construction from time to time.

Meanwhile, according to DC Vikram Singh, the appointment of the Duty Magistrate had been done for the drive meant to be started this month as the programme had been chalked out as per the instructions of the state government. He said unauthorised structures and colonies within the controlled area, urban area and the restricted belt along the National Highway and Scheduled Roads under the jurisdiction of areas like Tigaon, Bhopani, Palla, BPTP Sarai Khwaja, Ballabhgarh, Chhainsa, Sector 7, Sector-58, Mujesar, Saran, Dabua, Surajkund, Dhauj and SGM Nagar were slated to be covered.