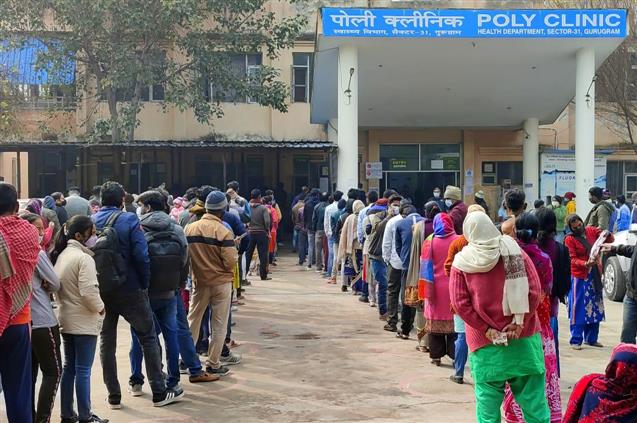 Residents queue up for vaccination at a polyclinic in Gurugram on Monday. photo: S Chandan

The Haryana government on Monday decided to keep all schools and colleges closed till January 26 in view of the increasing cases of Covid.

As of now, the state is witnessing both Delta and Omicron cases. Omicron is three to five times more infectious. It is raging as a number of doctors and nurses have been infected. Next seven to 10 days are crucial. Dr Dhruv Chaudhary, State Nodal Officer for covid

Chandigarh: Till January 9, a total of 136 Omicron cases, including 57 from Gurugram and 32 from Faridabad district, have been detected across the state. Of the total 136 patients, 82 are international travellers while 13 are their contacts. This implies that 69.9% of Omicron cases in the state are related to the foreign travellers.

Education Minister Kanwar Pal Gujjar said online teaching would continue during this time and schools and colleges would focus on the preparation of the upcoming examination.

Amid surge, the authorities have extended the Covid curbs to eight more districts.

Chief Secretary Sanjeev Kaushal issued orders for Sirsa, Rewari, Jind, Fatehabad, Mahendragarh, Kaithal, Bhiwani and Hisar in Group A districts. Cinema halls, theatres, multiplexes will remain closed along with sports complexes, stadia and swimming pools. Entry to all entertainment parks remains prohibited. The offices, both government and private, except for emergency or essential services, are advised to function with 50% attendance. Moreover, the malls and markets will be allowed to open up to 6 pm. The bars and restaurants are allowed to operate with 50% seating capacity.

Meawhile, the state’s weekly cases have jumped 8.4 times within the past seven days i.e.from January 3 to 9. It recorded 19,234 cases and eight deaths in the past week.

Meanwhile, there has been no let-up in the Covid surge as the state reported as many as 5,736 fresh infections and five fatalities on Monday. The state also reported 26 cases of Omicron variant, taking the tally to 162, of which 17 are active while the rest have been discharged.

The recovery rate stood at 95.93%, the bulletin added.