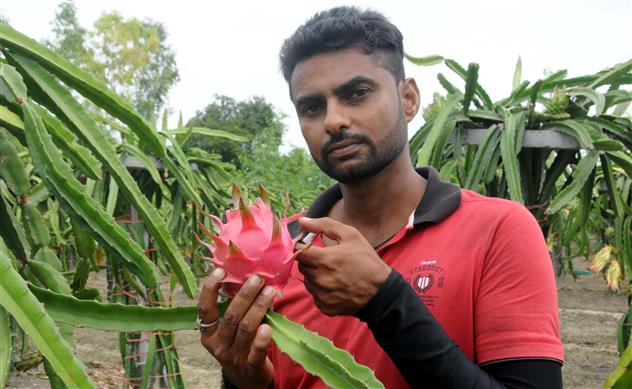 Kuldeep Rana at his farmhouse in Karnal.

When Kuldeep Rana (32) — who worked as an electrical engineer in South Africa — realised that his heart was in his homeland, he quit his job to become a progressive farmer. He has been growing dragon fruit in Gharaunda and earning good returns (around Rs 15 lakh annually). Besides, he gives training to young farmers who want to follow his footsteps.

Inspired by the dragon fruit farming in South Africa, he, along with his parents, started cultivating dragon fruit on half an acre of land. Now, he is growing the fruit on 1.5 acres and plans to expand the production.

“I worked as an electrical engineer in South Africa from January 2018 to November 2021. Apart from doing my job, I spent my time gathering knowledge about farming. In December 2018, when I came to India for a break, I brought some stems of this cactus plant for a trial. We started farming on a trial basis in 2019. After the trial was successful, I quit my job in November 2021 and started working as farmer,” said Rana.

Four plants are grown on a single pole and each pole on an average gives 10 kg production in second year and 26 kg in the third year. Rates of this fruit range from Rs 150 to Rs 350 per kg as per season. It is a summer crop that gives fruit from May to December, he added.