Girders for flyover to be placed from Dec 7 to 11 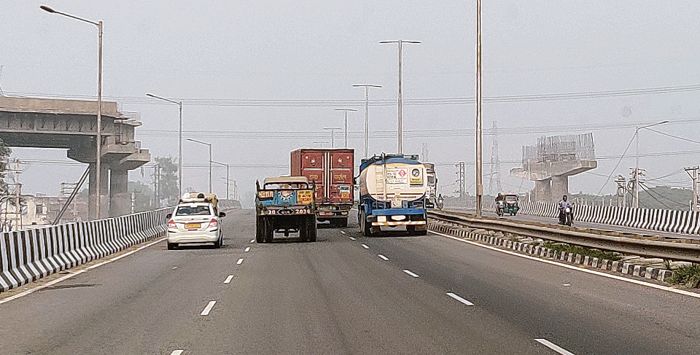 The spot on the NH-19 in Faridabad where girders for the under-construction Delhi-Mumbai Expressway are to be placed.

The movement of traffic on National Highway-19 passing through Faridabad district is likely to remain affected for four days this month in view of the ongoing the Delhi-Mumbai expressway project.

“The traffic is likely to be diverted to alternative routes between December 7 and 11 as the agency constructing the expressway has decided to place girders for the flyover that will cross the highway near Kailgaon village,” said sources in the National Highways Authority of India (NHAI).

The vehicular movement on this passage is expected to remain halted for about an hour daily on the above mentioned dates. The plan for providing alternative routes via link and service road is being worked out for the traffic moving towards Delhi and Agra, it is claimed.

“The contractor initially wanted to carry out the work in just one day, but in view of the problems related to heavy traffic, it has been decided that the work will be split over four days,” says sources in the district administration.

Two girders are likely to be placed in a day and within 40 to 45 minutes, it is claimed. The traffic moving towards Palwal may be diverted from Sahupura Chowk via Sunped village, so as to ensure vehicles have access to the main highway via Deeg and Pyala villages. Vehicles heading towards Delhi are likely to get diverted to Tatarpur village via the Dudhola crossing near Prithla village, according to the sources.