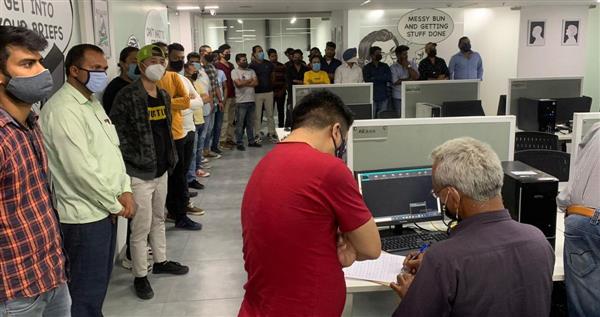 The call centre being run at Udyog Vihar, Phase 1, Gurugram.

The cyber crime unit in collaboration with the CM flying squad busted another fake call centre in Gurugram on Friday.

Over 30 men and women, including the mastermind, working as employees in the centre being run at Udyog Vihar, Phase 1, here were nabbed.

The accused used to dupe foreigners through pop-ups offering technical support and antivirus etc. Two main server laptops have been seized by police.

The CM squad and the cybercrime police conducted a joint raid after getting a tip-off that a fake call centre was being run from Plot No. 108, Udyog Vihar, Phase 1 here. When a team reached the spot, more than 30 employees were found engaged in the job. They did not possess any valid OSP licence from the Department of Telecommunications or any other agreement/MoU related to their work.

The police detained more than 30 persons and arrested six, including the owner and the manager of the call centre. The arrested accused have been identified as call centre owner Abhinandan Kumar of Dwarka, Delhi, manager Sunit Gautam of Hauj Khas, Delhi, Saurabh Shankar, Ajay, Harender Singh and Manipur resident Huidrom Samson Meitei.