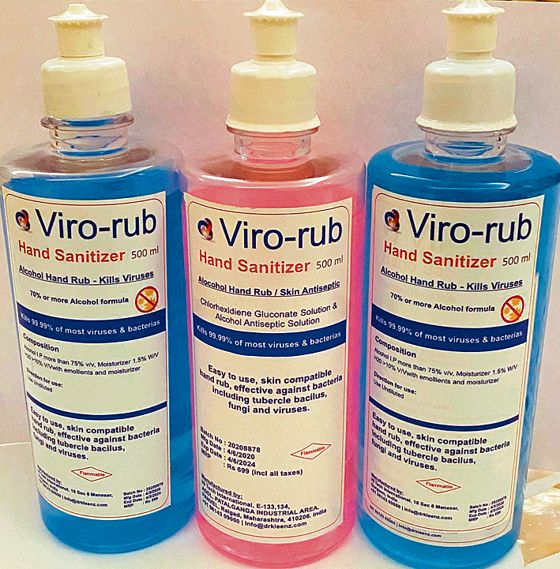 As the demand for alcohol-based hand sanitisers increased due to the Covid-19 scare, a number of illicit units manufacturing the commodity seem to have mushroomed across the state, particularly in the NCR.

On a tip-off, a team of officers from the Food and Drugs Administration (FDA), Haryana, today unearthed a “fake” manufacturing unit making spirit-based hands sanitisers at Manesar in Gurugram district.

Ashok Meena, Commissioner, FDA, Haryana, said that the unit functioning under the name of Hi-Tech International at Plot 18, Sector 6, Manesar, did not have any licence required under the Drugs and Cosmetics Act, 1940.

Chauhan said that the hand sanitiser was being filled in the unit under unhygienic conditions by labourers. The unit did not have any manufacturing chemist or analytical chemists for manufacturing or testing the goods or the raw material.

“We have seized 5,000 bottles of sanitiser filled under the brand of Viro-rub. A large number of empty bottles and labels have also been seized. Around 1,000 litres of isopropyl alcohol (IPA) has also been seized from the unit,” said Chauhan.

He said that the unit, Hi-Tech International, is into manufacturing of industrial oils and its owners have informed the authorities that they started manufacturing hand sanitisers just 10 days back.

“They had already sold 2,500 bottles of the sanitiser in the market before the FDA authorities could get a tip-off and raid the unit,” he added.

He said it seems that they started manufacturing sanitisers to make a quick buck in view of the Covid scare.

Manmohan Taneja, Assistant State Drugs Controller, Haryana, said that the sanitiser is not only being manufactured in an unlicensed unit, but is also spurious, adulterated and misbranded.

Showing two bottles of Viro-rub manufactured by this company in Manesar and one bottle of that manufactured in its Maharashtra unit, Taneja said that the two formulations have the same brand name but have different formula, which is not allowed under any circumstances.

He further said that while the company was using isopropyl alcohol for manufacturing the sanitisers, the label showed it was using Alcohol IP, which is ethyl alcohol.

Mukul Sareen, a partner in Hi-Tech International, however, denied any wrongdoing by his company.

“Ours is a Rs 100-crore manufacturing unit with a reputation of manufacturing quality products. It is not that we were manufacturing the goods in a single room unit,” Sareen claimed denying suggestions that the hand sanitiser was being manufactured in unhygienic conditions.

SpaceX spent $80 million on Ukraine, 0 on Russia, Elon tweets after Zelenskyy asks people ‘which Musk they like more, one who supports Ukraine or Russia’,

At 351, Batala slips in Swachh rankings

SDE gets notice for 'wrong report' on stubble burning