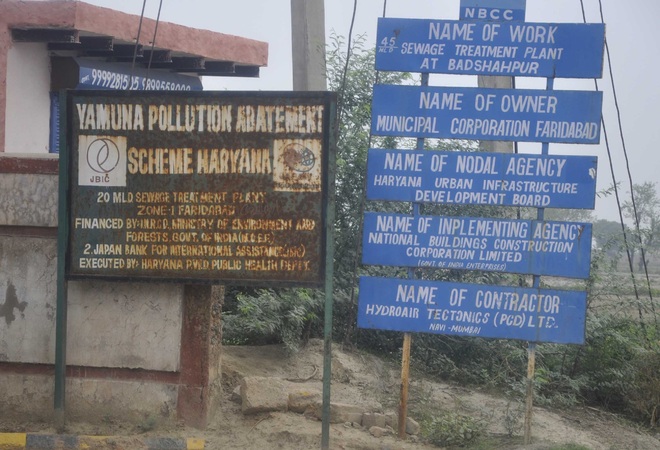 The plants were upgraded under the JNNURM in 2009-10 and private companies were handed over the work of upkeep.

The sewage treatment plants (STPs) in the smart city here are in a mess. All three STPs operated by the civic body are lying non-functional for the past over a year and sewage is not being treated as per norms.

The Municipal Corporation (MC) released tenders for construction of three new STPs with a capacity of 240 MLD at a cost of Rs 242 crore.

Revealing that the existing STPs at Badshahpur, Pratapgarh and Mirjapur villages in the district having a total daily capacity of 115 MLD have been lying non-operational for over a year due to poor maintenance and outdated technology, sources in the civic body said the operation of the STPs had been irregular and not up to the standard ever since the work had been outsourced.

They said untreated water was disposed of in a river or canals, causing severe water pollution. According to officials, the plants were upgraded under the JNNURM in 2009-10 and private companies were handed over the work of upkeep.

The contract of the Badshahpur plant given in 2011 for five years was further extended to 2020. In a notice by the MC on August 16, a penalty of Rs 90 lakh had been imposed for poor upkeep of this plant. Though the company had been asked to repair the faulty machinery within seven days, no work had reportedly been taken up so far.

Vishnu Goel, a social activist, alleged that no action had been taken against the companies for poor work. He said clogged sewer lines cleaned on outsourcing basis has resulted in extra financial burden on the civic body, which was already facing financial crunch.

“We have stopped the payment of one of the companies and have decided to build new STPs with higher capacity and new technology, which are likely to become functional in 18 months,” said Thakur Lal Sharma, chief engineer, MC.

He said new STPs would come up on the existing sites and would resolve the problem of sewage treatment and disposal.