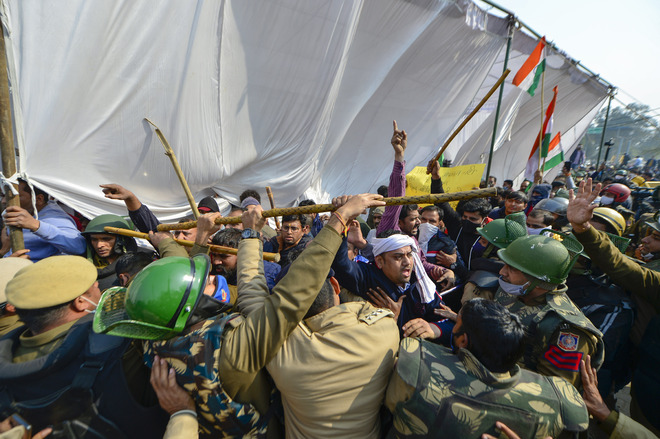 Police personnel try to pacify the crowd after a clash broke out between locals and farmers at the Singhu border on Friday. PTI

Clashes broke out between protesting farmers and a group of people from adjoining villages at the Singhu border on Friday.

Enraged over the protest, people raised slogans against agitating farmers. Demanding that the site be vacated, they pelted farmers with stones. The police used tear gas shells and batons to bring the situation under control.

As many as 500 peoplefrom various villages — Singhu, Ghogha, Alipur, Bakhtawarpur, Hamidpur, Bawana, Palla, Daryapur and Bajitpur — gathered near a temple at the border and started raising anti-farmer slogans. They asked the farmers to vacate the National Highway-44 as they had been facing problems.

The Delhi Police tried to pacify them, but they started pelting farmers with stones. Scores of farmers gathered at the spot and clashes broke out between them and the residents. As per sources, stone-pelting went on from both sides for 10 minutes.

The police tried to intervene, but as the situation deteriorated, they used tear gas shells and batons to control the crowds.

Meanwhile, Alipur SHO Pradeep Paliwal was injured during the clash. Following the incident, the police rounded up a youth from the spot.

Ravinder Badkhalsa of Badkhalsa village in Sonepat said people of adjoining villages had started raising their voice against the protest.

“People of villages in Delhi raised their voice against the farmers’ protest today. Residents of Sonepat villages did not participate in the protest today,” he said.