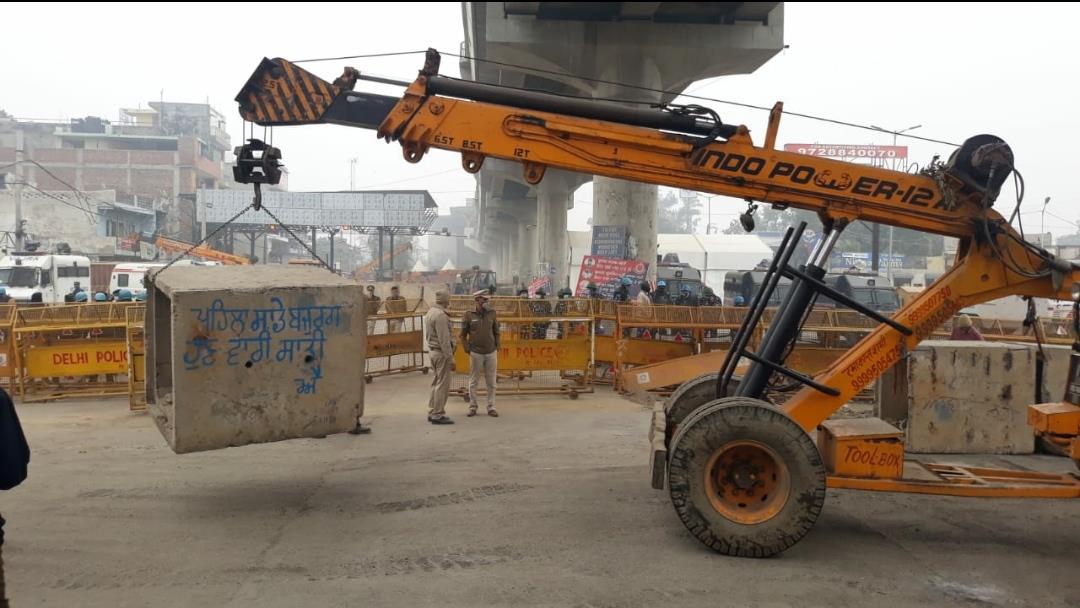 Boulders being removed from Tikri border on Sunday. Tribune photo

Two days ahead of Republic Day, the Delhi police on Sunday initiated work to clear the Delhi-Rohtak highway at Tikri border with removing boulders from cranes there.

The boulders were placed to prevent entry of protesting farmers who have been camping there for the past around two months. The police also lifted the sand dumped on the highway. However, two-layer simple barricading on the border is yet to be removed.

Purushottam Singh Gill, a leader of Bharatiya Kisan Union (Lakhowal), said the Delhi police had assured to lift the barricading completely before the Republic Day in view of tractor parade to be taken out by protesting farmers on January 26 following the call given by the Sankyukt Kisan Morcha. The route for the tractor parade had been finalised and the parade would be peaceful, he added.

Vikas Sisar, another farmer leader from Haryana, said farmers were enthused over the tractor parade and were gearing up to participate in it. “Volunteers have been roped in to manage the parade. They will be issued identity cards and given special jackets for their recognition,” he added.

Meanwhile, a large number of people from Punjab in buses, cars and tractor-trailers reached Tikri border to join the Tractor parade on Tuesday. Those who have been working in the private sector or doing business have also come here to express solidarity with the farmers.

Jhajjar SP Rajesh Duggal said 25 companies of Paramilitary and Indian Reserve Battalion (IRB) along with local police had been deployed at Tikri-Bahadurgarh border and proposed route of the tractor parade to facilitate the farmers and to remove traffic congestion during the tractor parade.

“We have talked to farmers’ leaders who have assured us to take out the tractor parade peacefully,” Duggal added.