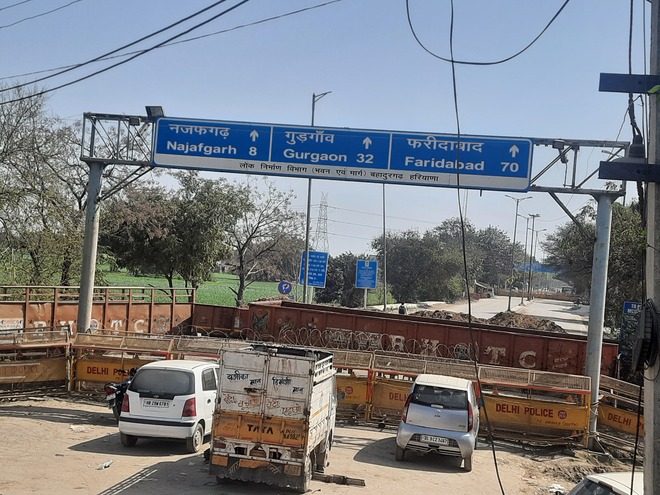 A view of the Jharoda border sealed by the Delhi Police. Sumit Tharan

Farmers camping at Tikri border have objected to the sealing of the Jharoda border leading to Najafgarh from Bahadurgarh town here.

They have demanded immediate opening up of the Jharoda border alleging that the Delhi Police have sealed the border with an intention to create an anti-farmer atmosphere among the public. The Jharoda border was sealed on January 26 after the violence in Delhi during the tractor-parade.

A large number of people from Jhajjar, Rohtak and surrounding areas daily travel to the national capital in connection with their jobs and business purposes.

They are now compelled to use either the Metro or alternative routes via villages to reach their destination in Delhi. The rising load of vehicles on the routes is leading to traffic congestion and disturbing the peaceful atmosphere of the villages.

“We don’t want to cause any inconvenience to the people. Hence, a clear passage has been provided to them even in the 15-km stretch between Jakhoda to Tikri where farmers have been camping since November 26. But the Delhi Police have kept the Jharoda border blocked for the past month, forcing thousands of commuters to opt for alternative routes. It is nothing but a move to harass the people to make them go against the farmers,” alleged Jai Bhagwan, a leader of Bhartiya Kisan Union (BKU).

Joginder Singh Nain, another farmer leader, alleged the border had been sealed deliberately with the intention to defame the farmers’ agitation. The Delhi Police must open the border immediately so that people could travel to Delhi without any trouble. The Centre is adopting all tactics to bring a bad name to the agitation, but it won’t succeed as the farmers were united and the protest is persistently garnering public support, he added.

Virender Hooda, another farmer leader, said the Centre and the Delhi Police have no answer as to why people are being harassed by sealing the Jharoda border which is the only way to reach Delhi from Bahadurgarh by one’s own vehicle?

“The Centre wants to cause anarchy and a civil war-like situation by sealing all border points of Delhi so that it could blame the farmers for it. But we will not let the Centre succeed in its design,” alleged Virender Hooda, adding that the issue would be placed in the next meeting of the Samyukt Kisan Morcha.

Notably, multiple barricades have been placed by the Delhi Police on the Jharoda border to prevent the entry of vehicles in Delhi from Bahadurgarh.