Farmhouse of gangster, 8 shops of peddler razed : The Tribune India 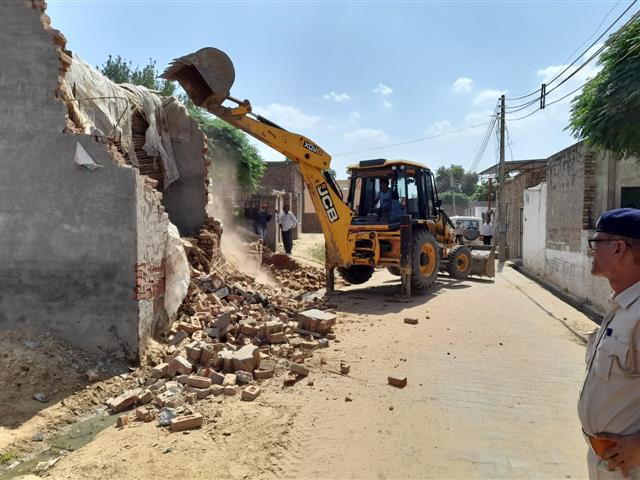 Police razes an illegal structure at a village in Sirsa district. Tribune photo

The District Town Planning Department and Town Planning Division of the Karnal Municipal Corporation (KMC) demolished a farmhouse of gangster Daler Kotia in Assandh and eight shops of drug peddler Gulzar Singh at Ram Nagar in the city today.

A large number of police personnel, led by the CIA-2 in charge inspector Mohan Lal, were deployed at the sites to ensure law and order. As per the authorities, the buildings had been constructed illegally and notices were served to these.

Kotia was also an accused in a case of firing at a doctor couple in Assandh and for demanding a ransom of Rs 2 crore from them. The incident took place on July 8 when three bike-borne youths went to the hospital and one of them started firing gunshots. The doctor couple and other staff members had a narrow escape.

RS Batth, District Town Planner (DTP), said these farmhouse and shops were constructed illegally and had been served notices one week ago and vacation notices were issued on Wednesday.

“We will continue same action against the illegal constructions,” said the DTP.

Sirsa: The Sirsa police removed encroachments on the panchayat land by drug smugglers and notorious elements in seven villages in the district on Thursday.

The Superintendent of Police (SP), Dr Arpit Jain, said the police had launched a crackdown on the drug peddlers who had encroached government or panchayat lands. He said they removed the illegally constructed structures in Ludesar, Dhukra, Hanjira, Rajpura Kairanwali, Tarkanwali and Rupana Bishnoian.

The SP said action had been taken to crack down on drug smugglers and in future also, action would be taken against drug smugglers.

On Thursday, illegal structures of Kuldeep in Ludesar village, Naresh in Dhukda village, Surender in Hanjira, Ravi in Rajpura Kairanwali, Sunil in Tarkanwali and Rinku and Madan in Rupana Bishnoian were demolished with bulldozers, the SP said.

Gurugram: The Nuh police on Thursday demolished the house of a gangster, Farukh, at his village, Bajidpur, which had been built illegally on panchayat land.

The accused is currently lodged in the Neemka jail and was involved in 10 cases of robbery, dacoity and ATM robberies.