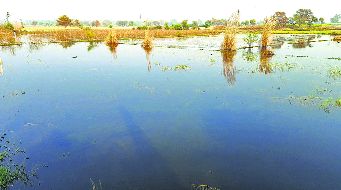 Having suffered extensive losses due to waterlogging in his paddy fields, Ravinder Nehra, a distressed farmer from Nidana village here, was hopeful of repaying his agricultural loan from the earnings of the next wheat crop. But his hopes were dashed to the ground as accumulated water is yet to be drained out from his field.

The water has already been removed from most areas. The remaining fields will also be dewatered before the deadline. I have sought a report from Executive Engineers about the situation. Bijender Singh Nara, Chief Engineer, Irrigation Dept

“Waterlogging damaged my paddy crop spread over 6 acres this year. To recover the losses, I was preparing to sow wheat crop over 15 acres, but the fields are yet to be fully drained leaving me high and dry. The situation forced me to take a loan for the weddings of my children. I will be ruined if the wheat crop is not sown,” said Nehra. He further said several other farmers in the village were also in a similar situation.

Mahender, another farmer of Nidana village, claimed over 50 acres in his village was still submerged in water leaving the wheat growers in trouble. “The government should not only ensure removal of water from the fields at the earliest, but also take concrete steps for permanent redressal of the issue,” he added.

Notably, unseasonal rain in September lashed the region leading to waterlogging in the fields. Besides in Nidana, the situation is, as per sources, similar in Bahu Akbarpur, Mokhra, Kharkara, Bhaini Maharajpur and Meham towns in Rohtak and Guda village in Jhajjar district.

“The water has accumulated in several acres of agricultural fields for the past three months. Though the water level has come down considerably, the fields are yet to be drained out fully, hence we will not be able to sow the wheat crop this season,” said Suresh, another farmer from Guda village, adding that the government should give them monetary aid to bail them out of this crisis.

Agriculture Minister JP Dalal also took stock of waterlogged fields in Rohtak yesterday and directed irrigation officials to ensure the removal of water at the earliest. He also asked officials of the Agriculture Department to prepare a report about the losses of non-insured crops so that distressed farmers should be given financial relief soon.

Meanwhile, the state government has directed all Executive Engineers (XENs) of the Irrigation Department to drain out accumulated rainwater from agricultural land in all districts within a week so that affected farmers can sow wheat and other crops.

The Superintending Engineers (SEs) of the department have also been asked to submit a report regarding the ground reality of accumulation of water in their area concerned on December 9.

Bijender Singh Nara, Chief Engineer (Lift Canal Unit, Panchkula), Irrigation Department, said all Executive Engineers were already working on dewatering the agriculture land in their area concerned. He said every SE would have to submit a certificate to the government about the removal of water from all fields in their area by December 9.