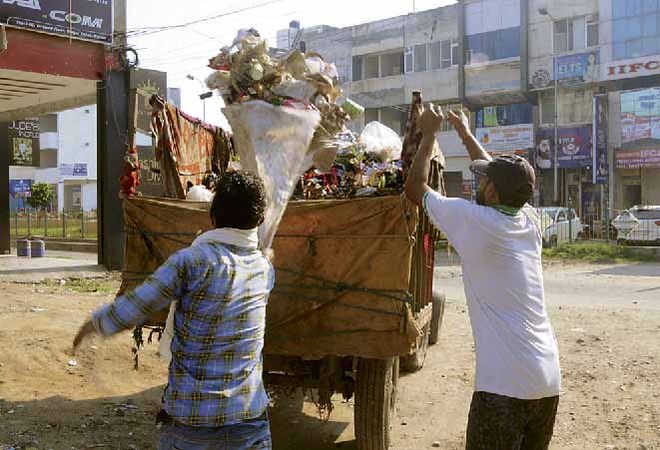 Finally, the door-to-door garbage collection has begun in Ambala City. It was made possible after the state government approved the tender and the local civic body allotted the work to a private agency in the city.

The work was allotted at the rate of Rs 2,250 per tonne of garbage, which was approved by the Department of Local Government.

As per the approved rate, the Municipal Corporation will pay Rs 11.5 crore per annum to the contractor as the city generates 140 tonne garbage on a daily basis. The work will also include segregation and transportation of garbage, a senior officer said here on Saturday.

He said the civic body would charge Rs 60 per month from the residents of 90,000 residential and commercial buildings in the city, which would work out to be Rs 6.5 crore per annum. The rest of Rs 5 crore payment to the contractor would be borne by the MC from its own sources.

“We want the city to be clean and green so that it could be ranked among the cleanest cities in the country during the next Swachh Bharat Survekshan,” said local MLA Aseem Goel, who formally launched the project.

The work had been stalled since September last year after the contractor had left the job alleging non-payment by the civic body.

For the past over a year, the MC had failed to resume the process after a row with the contractor while the local opposition leaders, supported by the residents, were alleging serious irregularities in the whole process.

Ever since the MC-run system had collapsed, the private cleanliness workers were collecting garbage from door-to-door and charging the residents at their own will in the absence of any regulation. The charges ranged between Rs 100 and Rs 150 per house.

After the contractors had stopped the work in September 2019, the MC had in January floated fresh tenders to hire new agencies for door-to-door garbage collection but except two old firms no other bids were received.

In the absence of any regulated door-to-door garbage collection system, the local residents were either forced to pay exorbitant charges or dump their daily waste at public places following which insanitary conditions prevailed in the twin towns.

District Bar Association president Rohit Jain, who had also dragged the civic bodies to the court for insanitary conditions, said the door-to-door garbage collection system had collapsed and dumped garbage was not being lifted for days.

In their petition filed under Section 22 of the Legal Services Authority Act 1987, a group of lawyers had sought directions to the respondents for taking appropriate steps to keep the environment pollution-free by restraining the employees and contractual staffers of MC from burning the garbage, including polythene, thermo-coal and waste of gardens and ensuring proper solid waste management and disposal within Ambala district.