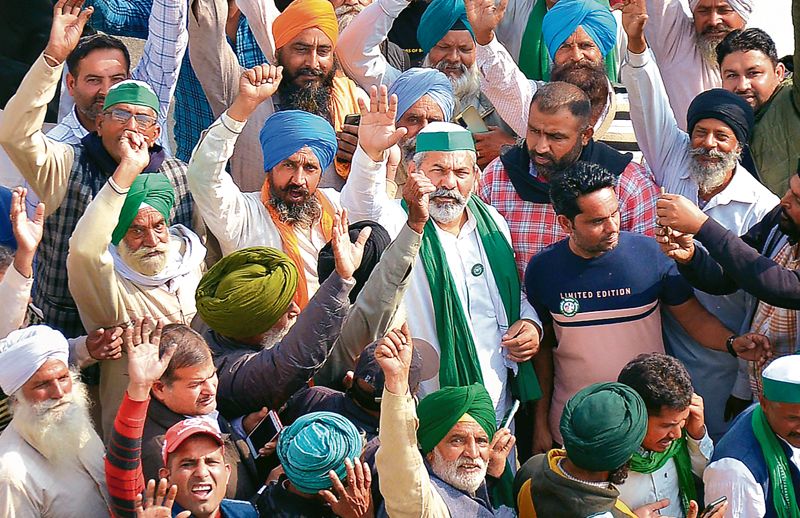 BKU spokesperson Rakesh Tikait and other union leaders react after the Bill to repeal the farm laws was passed in Parliament. PTI

With Parliament passing the Bill to repeal the farm laws, the Samyukt Kisan Morcha (SKM) today gave one-day ultimatum to the Centre to accept its other demands, including setting up a joint panel of farmers and officials over MSP guarantee issue.

It decided to hold an emergency meeting at Singhu on December 1 to decide the next course of action.

The government wants there should be no protests, but we will not leave the site before MSP is discussed among other issues. —Rakesh Tikait, BKU leader

Buta Singh Burjgill, president, BKU (Dakaunda), disclosed this after a meeting of 32 farm organisations of Punjab wherein leaders reviewed the prevailing situation and discussed a “suitable time” to return home. “We now want the Centre to accept our demands mentioned in an open letter written to the Prime Minister,” said Burjgill, adding the repeal of the laws proved that no one was bigger than the court of people. Farmer leader Harmit Singh Kadian said all 32 Punjab

unions had chalked out the next strategy regarding the agitation and it would be discussed at the SKM’s meeting on December 1. The final call would be taken by the SKM unanimously, he said.

Referring to their six demands, including legal guarantee for MSP and withdrawal of cases against farmers and compensation for those who died during the stir, Kadian said the Centre must accept these for an early resolution to their issues