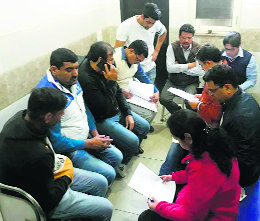 Health officials at a Panipat hospital on Monday. Tribune photo

Kapil and the decoy customer reached a hospital on the Assandh road on Monday. The joint team followed them to the hospital.

Kapil paid Rs 800 for ultrasound at the hospital, where a doctor conducted the test. Kapil took Rs 80,000 from the woman and said something in her ear.

Health officials caught him and recovered Rs 80,000 from him. The team grilled the doctor about ultrasound, but found no wrongdoing.

Kapil was handed over to the police. A case was registered under relevant sections of the PCPNDT Act and the IPC.