Handed over a cheque for Rs 10 lakh to her 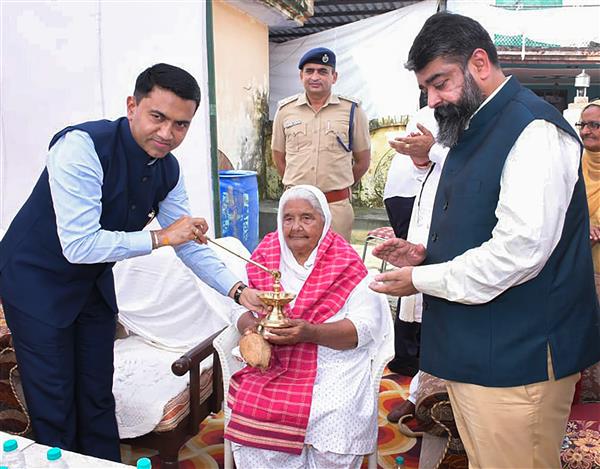 Goa Chief Minister Pramod Sawant on Wednesday paid a visit to Charanjeet Kaur, whose husband Karnail Singh Benipal was killed at Patradevi in 1955 while fighting for the state's liberation from Portuguese rule.

Sawant flew down from Goa to meet Kaur and her family in Haryana's Ambala, about 45 km from Chandigarh.

Addressing a press conference here in the afternoon after meeting Kaur in Ambala's Barola village, the Bharatiya Janata Party (BJP) leader said he felicitated her and handed over a cheque for Rs 10 lakh to her on the occasion of Azadi Ka Amrit Mahotsav and 60 years of Goa's liberation.

"Goa is eternally indebted to the satyagrahis, freedom fighters and their families who laid down their lives for its liberation," Sawant, who was accompanied by BJP's Ambala City MLA Aseem Goel, said.

Goa, which attained statehood in 1987, was liberated on December 19, 1961 from the Portuguese rule.

Benipal had sacrificed his life at the young age of 25 for Goa's liberation. He was hit by bullets on the chest on August 15, 1955 at Patradevi in the coastal state.

Sixty years of Goa's liberation are also being observed, he said, adding that his government organised a function on August 15 to remember those who laid down their lives for the state's freedom.

Certificates of honour were presented to the relatives of such freedom fighters from Goa and 10 others from various parts of the country, he said.

A relative of Benipal was also present at the event. Sawant said he had then told him that he would come to Ambala to meet Kaur and seek her blessings.