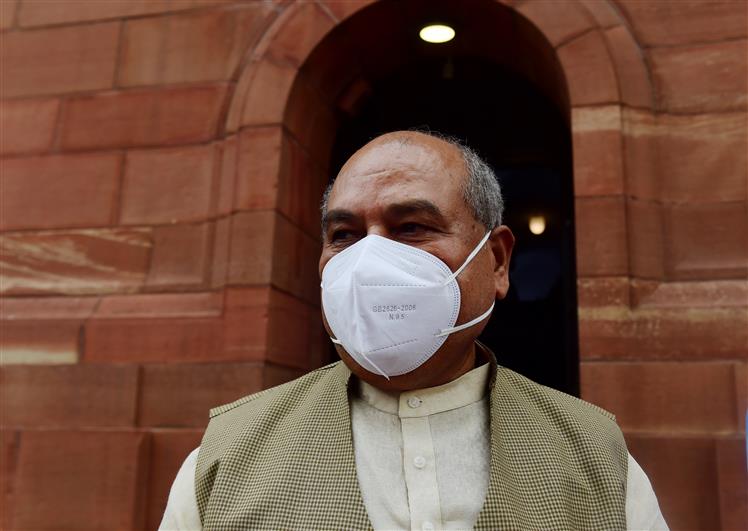 The government on Tuesday said it will remain open to discussions with protesting farmers' unions to resolve issues over three new agriculture laws passed by Parliament in September last year.

"The government has been engaged in serious, sensitive and active discussions with the farmers' unions to resolve the issues. During various rounds of discussions, government continuously requested the farmers' unions to discuss the provisions of the farm laws, so that if there is an objection to any provision, the advancement can be made towards a resolution of those," the minister said.

But the farmers' unions insisted only on the repeal of the farm laws, he added.

In all the rounds of discussions with the farmers' unions, the minister said the government had stressed that instead of insisting on the demand for the repeal of the laws, the unions should discuss their concerns on the clauses of farm Acts so that their concerns can be resolved.

Thousands of farmers, mainly from Punjab, Haryana and western Uttar Pradesh, have been camping at Delhi's borders for more than seven months in protest against the three laws that they say will end state procurement of crops at MSP (Minimum Support Price).

Supreme Court has put on hold the implementation of the three laws till further orders and set up a committee to find solutions.

During the 10th round of talks held on January 20, the Centre had offered to suspend the laws for 1-1.5 years and form a joint committee to find solutions in return for protesting farmers going back to their respective homes from Delhi's borders.

The farmers' unions have been agitating against the three laws -- 'The Farmers' Produce Trade and Commerce (Promotion and Facilitation) Act, 2020', 'The Farmers (Empowerment and Protection) Agreement On Price Assurance and Farm Services Act, 2020' and 'The Essential Commodities (Amendment) Act, 2020.

"Giving top priority to the interest of farmers, government vide letter dated 9th December 2020 addressed to farmers' unions, explained point by point, how the concerns expressed by the farmers were being taken care of in the proposal of the Government of India.

The minister said these laws are intended to provide an ecosystem where the farmers can enjoy the freedom of choice relating to the sale of farmers' produce which facilitates remunerative prices to farmers through competitive alternative channels for selling their produce.

"These farm Acts will facilitate direct buying from farmers in trade area by traders, processors, exporters, Farmer Producer Organizations (FPOs), agriculture co-operative societies etc., so as to facilitate farmers with better price realisation due to reduction in supply chain and marketing cost to enhance their income," he added. PTI