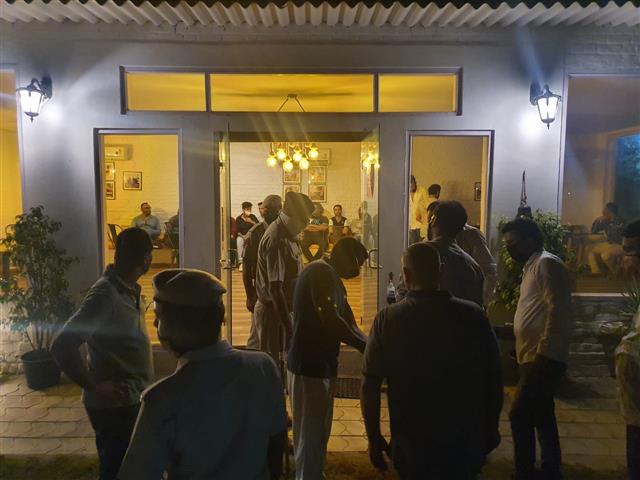 A special team headed by ACP Karan Goel raided the spot where the youngsters were holding a party and caught 30 people. Tribune Photo

Gurugram police busted a late-night booze party in the Aravallis on Saturday night.

As many as 22 boys and eight girls were nabbed on Faridabad road for drinking publicly and throwing COVID-19 precautions to the wind.

The police have booked all 30 for drinking in public and violating the pandemic precautions.

The host, Harsh Gosain, a Sector 46 resident, has been booked under the Excise Act as he had no valid permissions to hold the party or serve liquor.

The police have seized four cartons of liquor from the spot.

According to Commissioner of Police KK Rao, the police received a tip-off about an illegal party being held at Off Road Adventure Zone in Baliyawas village, Gurugram.

A special team headed by ACP Karan Goel raided the spot and caught 30 people, including party organiser Gosain. According to the police, the majority was not wearing masks.

Initial investigation revealed that the youngsters had been invited to the party through WhatsApp.

“Drinking publicly and hosting a party without valid excise permission is illegal. In the current scenario, such gathering is a violation of the Disaster Management Act. We had received information about the party and conducted a raid, catching all red-handed. They claimed they were invited through WhatsApp,” said CP KK Rao.

The CP added that while the investigation was on, many among the nabbed youngsters were underage.

Public drinking has emerged as the biggest challenge for the police post lockdown. There are numerous complaints of people drinking not just inside cars but even in markets as markets shut early now. The police plan to launch a drive against the menace soon.