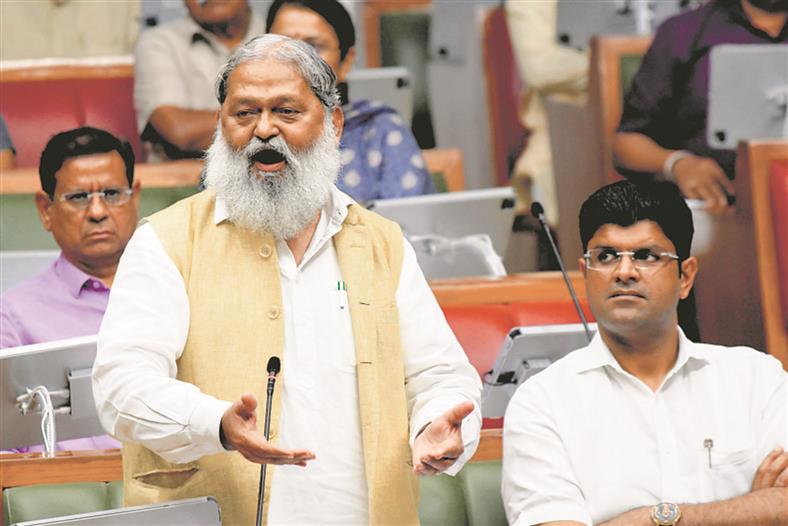 Cornered by the Opposition over rampant illegal mining in the state, the Haryana Government today reaffirmed its commitment to conduct a judicial probe into the mowing down of Tauru DSP Surender Singh. It admitted that the dumper, stopped for checking by the slain officer on July 19, was indeed headed towards a stone crusher.

It was for personal use, cops had claimed

During a discussion on the matter in the Vidhan Sabha, Home Minister Anil Vij said the police knew about the stone crusher the dumper was headed towards. So far the police had been claiming that the dumper was used for transporting stone “for personal use”. Vij refused to divulge more, saying, “Let the SIT complete the probe.” He said the probe had been delayed because the Home Secretary was due to retire.

CM Manohar Lal Khattar said the crackdown on stone crushers since July 19 revealed many cases of mismatch between documents and stocks in Nuh and Yamunanagar. “We have fined such operators. We also found that eRavana documents were procured by some crusher owners from as far as Andaman and Nicobar Islands and Tripura. It is not feasible to get material from there,” he said.

Leader of Opposition Bhupinder Hooda said he had no faith in the SITs formed by the Khattar government. “Show me one such SIT that has submitted its report?” he asked.

Vij said directions had been given to impound vehicles plying without registration number plates. Mines Minister Mool Chand Sharma gave a detailed reply on the number of illegal mining cases registered this year (450), vehicles impounded (4,121) and penalty collected (Rs 60.37 crore). He said this showed that the government was serious about checking the menace.

Earlier, INLD’s Abhay Chautala alleged the government had turned a blind eye towards the growing instances of assault on officials by mining mafia. “At least 22 such cases were reported, but the mines minister termed these as stray incidents.

The mafia gets encouraged every time it manages to evade action,” he said.

Quoting a news report by The Tribune, Congress MLA BB Batra took on the government and said a sarpanch could not be expected to check illegal mining as stated by the minister.

Deputy Leader of the Congress Aftab Ahmed said locals were being harassed in the garb of checks in villages. “There is an attempt to create fear among them. Punish the guilty, but don’t harass the innocent,” he said.