Haryana goes in for micro irrigation : The Tribune India

Haryana goes in for micro irrigation 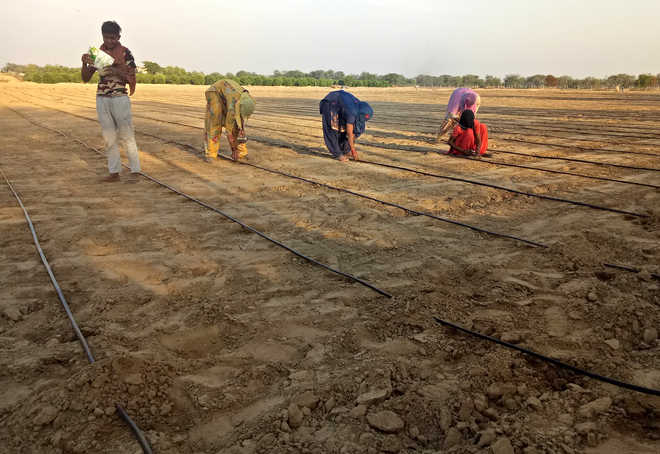 The projects that involve micro irrigation schemes like drip and sprinkler irrigation will have nearly 64 per cent funding by way of loans from NABARD and 13 per cent in the shape of subsidy from the Centre.

Devender Singh, Additional Chief Secretary, Irrigation and Water Resources Department, said the Centre had set up a micro irrigation fund with an initial provision of Rs 6,000 crore in 2019-20, and by taking swift action, the state government was able to get sanction for four big projects worth Rs 1,200 crore.

“The state government is conscious of conservation of water and has taken various steps to cover more areas under micro irrigation to address the water scarcity issue and arrest the fall in groundwater table. The government has constituted the Micro Irrigation Authority for implementation of micro irrigation projects in a big way,” said Singh.

He said the state government had notified treated waste water use policy, which provided for 25 per cent use of treated waste water in the municipality and the rest to be used by the industry, power plants and irrigation. This micro irrigation project was a step towards implementing this policy. This would benefit 7,500 farmers in 105 villages.

The cost of the project was Rs 2.14 lakh per hectare and farmers’ share would only be Rs 12,750, of which they would pay Rs 4,250 in the beginning and the rest in 10 yearly instalments. Singh said community-based micro irrigation schemes were proposed on canal outlets of eight channels in the Bhakra canal by farming water user associations in Fatehabad, Sirsa and Hisar districts.

“Common infrastructure will be provided in the command area of each outlet to be covered under this project, which will be installed by the Command Area Development Authority (CADA) through a concessionaire on the PPP mode,” he said.

With regard to projects on existing commands, the government planned to set up community-based micro irrigation schemes on canal outlets in various canal commands in 13 districts of the state. The fourth one was an innovative project for Mewat and Hisar districts to provide top-up subsidy to 14 CADA projects.

“It proposes to provide top-up subsidy for the Loharu-Siwani area under a special plan. It will cover 36 over-exploited and critical blocks for minimising groundwater use, capacity-building for soil, adoption of water-saving technologies, additional coverage under irrigation and crop diversification,” said Singh.