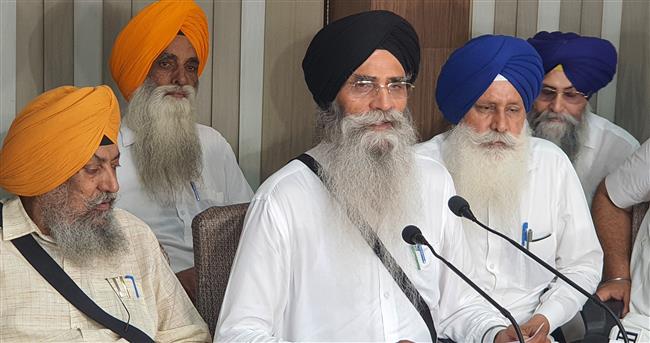 The SGPC on Tuesday said it will file a review petition against the Supreme Court order upholding the constitutional validity of the 2014 law enacted by the Haryana government to manage the affairs of gurdwaras in the state.

However, Haryana Sikh Gurdwara Parbandhak Committee president Baljit Singh Daduwal welcomed the SC verdict and said Sikhs of Haryana will now be able to manage their shrines in the state.

Haryana Chief Minister Manohar Lal Khattar congratulated the entire Sikh community in Haryana, according to a tweet in Hindi by the CM's Office.

Speaking to reporters in Chandigarh, former Haryana Chief Minister Bhupinder Singh Hooda, under whose government the Haryana Sikh Gurdwara (Management) Act came into being, hailed the apex court verdict, saying it is in the interest of Sikhs in Haryana.

Notably, there are 52 gurdwaras in Haryana. Five of them are being managed by the HSGPC while the rest are under the Shiromani Gurdwara Parbandhak Committee (SGPC) at present.

Besides the gurdwaras in Punjab and Haryana, the SGPC also manages one each in Himachal Pradesh and UT Chandigarh.

A bench of Justices Hemant Gupta and Vikram Nath on Tuesday dismissed the plea filed by a member of the SGPC seeking quashing of the Haryana Sikh Gurdwara Act.

The top court's judgement came on a 2014 plea filed by Harbhajan Singh, a resident of Haryana, who contended that Section 72 of the Punjab Reorganisation Act, 1966 says the power to make law in respect of the SGPC as an inter-state body corporate has been reserved with the central government only and there is no provision in law for any bifurcation by enacting a State legislation.

"'It has been decided to file a review petition following the Supreme Court judgment. The opinion of senior lawyers will be taken in this regard and the legal action is required accordingly," SGPC chief Harjinder Singh Dhami said.

The decision was taken in the SGPC executive committee (EC) meeting presided over by SGPC President Harjinder Singh Dhami, in Amritsar.

Dhami said it is not right to comment on the Supreme Court's judgment, but the move of the then Haryana chief minister Bhupinder Singh Hooda to form the separate gurdwara management committee for Haryana is “dividing the Sikh power”.

Khattar said that having an independent committee of Haryana would definitely make the Sikhs of the state more empowered.

Meanwhile, a delegation of Haryana Sikhs called on State's Home Minister Anil Vij at his residence in Ambala.

Later, speaking to reporters, Vij welcomed the apex court decision and said that for a long time the Sikh community had wanted to have their committee in Haryana. Meanwhile, SAD chief Badal said it was extremely unfortunate that the SGPC, which was an inter-state body, had been bifurcated by recognizing a state legislation even though the power to make law on this issue was reserved with the Centre.

Badal said, “The Congress party had been trying for decades to weaken the SAD as well as Sikh institutions and the 2014 Act forming a separate body to manage gurdwaras in Haryana was part of this strategy.” He said it was equally condemnable that the Punjab government under Amarinder Singh had taken an “anti-SGPC” stance in the apex court in this case.

“The last nail was hammered in by the Bhagwant Singh Mann government whose Advocate General gave a written submission against the SGPC in the case,” claimed Badal in Chandigarh.

Asserting that the SAD would not tolerate tinkering with a hundred-year-old Act, Badal said “the party has called a meeting of senior leaders to decide on the next course of action which could include legal recourse”.

He also appealed to all 'panthic' organisations to unite to “defeat the designs of anti-Sikh forces to divide the Sikh community and rule by proxy.” Badal said, “The country had earlier witnessed how the nature of the elected Delhi Sikh Gurdwara Management Committee was changed overnight and it was taken over.”