Haryana to be first state to set up helipads in all districts: Dushyant Chautala : The Tribune India

Haryana to be first state to set up helipads in all districts: Dushyant Chautala 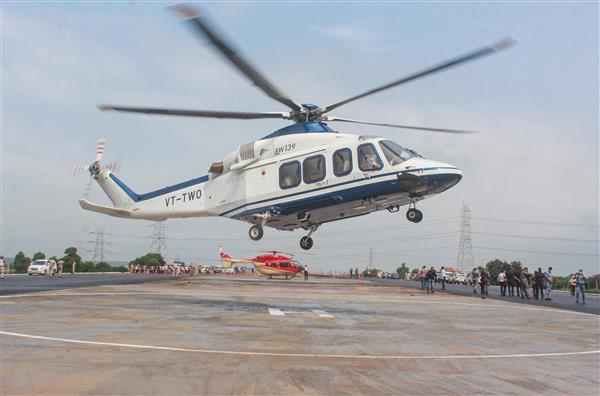 An institute will be set up to impart airport security training. - File Photo

Haryana is all set to become the first state in the country to make available district-wise helipads to tackle emergency-like situations. Arrangements will also be made for ensuring proper night landing facility at these helipads.

This was stated by Deputy Chief Minister Dushyant Chautala while chairing a meeting with officials of the Civil Aviation Department. During the meeting, he gave necessary directions to the officers concerned.

Chautala said the possibility of setting up a helipad in the district Police Lines should be evaluated. With the development of this type of infrastructure, helicopter landings could be done in emergency situations, he added. Arrangements would also be made for the security of these helipads, he said.

The Deputy CM said a Civil Aviation Ministers’ Conference was held recently. During the conference, the need to build a helipad in every district of all states across the country was discussed. “In that direction, the Haryana Government has expressed its desire to take this first-of-its-kind initiative,” he said.

Chautala said the Haryana Government had always been at the forefront in implementing schemes and concepts launched by the Centre. The plan to set up helipads in all districts would also be implemented soon.

For this, instructions have been given to the Home Department and the Director General of Police to develop infrastructure. “Certainly, Haryana will be the first state in which every district will have the helipad facility,” he added.

The Deputy CM said an institute would also be set up in the state for imparting airport security training. He directed the officials to earmark sites in Hisar, Sirsa and Pinjore for that purpose.