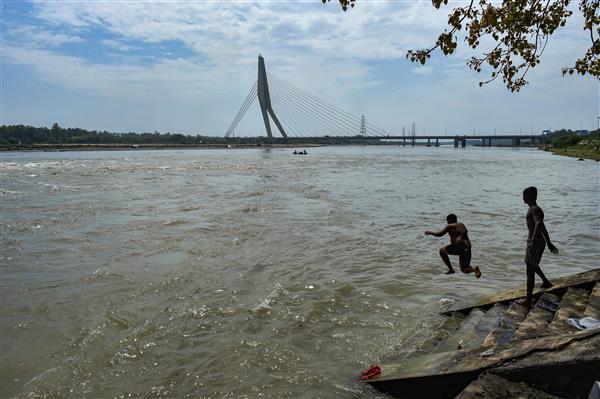 The Yamuna in New Delhi. file

Haryana is actively considering the issue of sticking to a 27-year old water sharing agreement and not releasing water “in excess” from the Yamuna to the National Capital Territory of Delhi.

A statement to this effect has been made before the Punjab and Haryana High Court. The bench, in turn, has directed the authorities concerned to examine and initiate apposite steps on a representation in the matter in addition to all other requisite steps.

The submission on water sharing by Haryana Additional Advocate-General Deepak Balyan came during the hearing of a PIL filed by a “public spirited person”, Ashish Chaudhary. He was, among other things, seeking directions to the State of Haryana and other respondents to release water from the Yamuna strictly in accordance with agreement dated May 12, 1994. His argument was that the supply of excess water was not only violative of the agreement, but also Article 14 and 21 of the Constitution.

In his petition placed before the Bench of Chief Justice Ravi Shanker Jha and Justice Arun Palli, Chaudhary through counsel Chandan Singh submitted that a memorandum of understanding was signed between the basin States of Yamuna River. Delhi was allocated 381 CS — 330 for drinking water and 51 for agriculture.

As the petition came up for hearing, Balyan submitted that the issues raised by the petitioner were under active consideration of the state authorities, especially in view of the prevalent water crisis in Haryana.

Balyan further submitted that the authorities were examining the viability of administrative and other measures to tackle the problem. Further, the departments concerned were also seized of the issue regarding water supply to the parties to the agreement, besides excess supply of water to the National Capital Territory of Delhi.