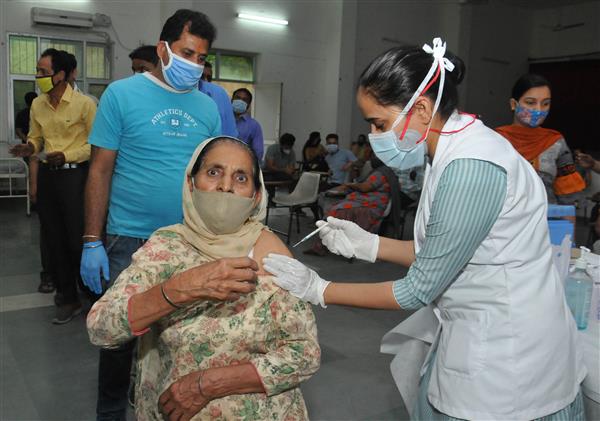 A woman getting COVID-19 vaccine at civil hospital in Jalandhar. Tribune photo

The Punjab and Haryana High Court on Wednesday sought details from the governments of the two states regarding the COVID situation in rural areas.

The court has sought a detailed report from Haryana on the work done at the ground level.

On a query put by the high court bench comprising Justice Rajan Gupta and Justice Karamjit Singh to Punjab’s Advocate General Atul Nanda “about monitoring of the situation in the rural areas where virus has spread rapidly”, he submitted that he will file a short affidavit on the next date of hearing. The prayer was accepted by the bench.

The court’s directives came during resumed hearing through video conferencing on a petition pertaining to the COVID-19 pandemic management in Punjab, Haryana and UT Chandigarh.

When asked about the spread of the disease in rural areas, Haryana’s Advocate General Baldev Raj Mahajan submitted that a plan has been drawn up and a senior administrative officer has been deputed for every district in Haryana to monitor the situation. Physical inspection in all rural areas/districts is being carried out.

“This court, however, needs a detailed report of the work done at the ground level. The status report may, thus, be filed in this regard by an officer not below the rank of Additional Chief Secretary, Health,” the bench ordered.

While accepting the prayer of Nanda to file the affidavit on the next date of hearing, the court directed that it be filed by an officer not below the rank of Principal Secretary, Health, Punjab government.

With both Punjab and Haryana witnessing a surge in COVID cases in recent weeks, there have been concerns about the infection spreading in rural areas.

Nanda brought to the court’s notice that 82 ventilators have been supplied to Punjab (by the Centre), out of which 71 are faulty.

He further submitted that 24 oxygen containers are available with them. The state has raised a demand for more.

However, if six containers are arranged at the earliest, it would ease out the situation in Punjab somewhat, Nanda submitted.

About 85,000 injections of remdesivir have been supplied whereas demand of 37,000 injections is still pending. He further submitted that Punjab needs about 4 lakh vials of Covishield vaccine immediately.

Additional Solicitor General of India Satya Pal Jain submitted that the request made by Punjab for supply of six more containers and release of pending quantity of remdesivir injections and vaccine shall be looked into forthwith.

As regards 71 faulty ventilators to Punjab, he submitted that the matter shall be examined immediately and necessary steps taken for rectifying the fault, if any, at the earliest.

He informed the court that the Centre has increased the daily oxygen supply to Punjab from 227 metric tonnes to 247 MT and to Haryana from 267 MT to 307 MT.

Nanda highlighted that under Corporate Social Responsibility (CSR) incorporated in Section 135 of the Companies Act, it is obligatory for the companies to contribute at least 2 per cent of their profit as social responsibility to the society in this period of crisis generated due to the pandemic.

“It is left to the three states to ask the corporate houses to participate in fighting the crisis by providing ambulances, oxygen beds, ventilators, CT scan machines etc. to government hospitals so that economically weaker strata of the society has easy access to such facilities. The states shall apprise the court about response, if any, received in this regard,” the bench said.

Touching upon another issue, the bench said Punjab, Haryana and UT Chandigarh may impress upon the private diagnostic centres to reasonably slash their rates for CT scan for COVID patients.

The court has fixed the next date of hearing in the case on Tuesday.

Pankaj Jain, senior standing counsel, Chandigarh, submitted that in view of the order passed by the court on May 7, a common strategy has been drawn up and ‘Uniform Anti-Corona Measures’ are being undertaken in the tricity (Chandigarh, Panchkula and Mohali).

Anupam Gupta, senior counsel, highlighted that though publication of the availability of the hospital beds has been started by Chandigarh but it is not in consonance with the established practice being followed in other states particularly, Haryana.

Pankaj Jain submitted that the same format shall be adopted and accurate information shall be publicized therein.

On another issue, Satya Pal Jain said the request of 5 MT of oxygen for PGIMER, Chandigarh exclusively, would also be processed expeditiously. PTI

Early in the morning, an NIA team, along with the Mumbai pol...

Sidhu, who was accused of being the key conspirator of the v...