Heavy rain, waterlogging throw traffic out of gear in Gurugram : The Tribune India

Heavy rain, waterlogging throw traffic out of gear in Gurugram 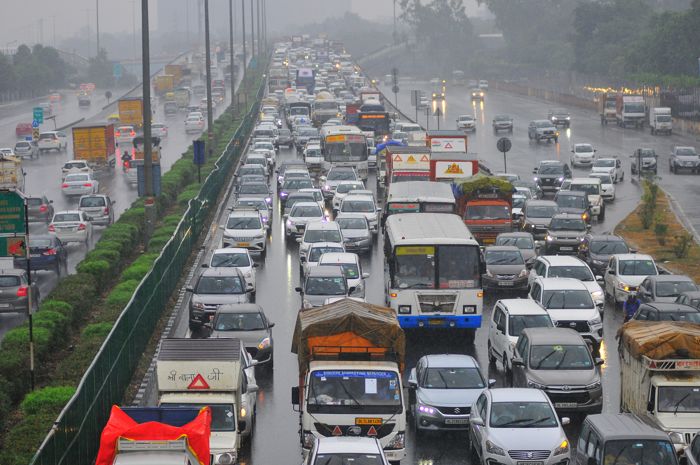 A huge traffic jam on the Delhi-Jaipur expressway in Gurugram on Thursday. tribune photo: S Chandan

Incessant rain led to waterlogging and traffic congestion at a number of places in Gurugram on Thursday. Police personnel were seen struggling to decongest main carriageways and service lanes almost the entire day in the city.

“Following rain, waterlogging has been reported at some places and due to this, vehicular movement is affected. We request all of you to come out on roads only for necessary works. Sorry for the inconvenience,” read an advisory of the traffic police, issued through its Twitter handle.

According to the Gurugram traffic police, vehicular movement on the Delhi-Jaipur National Highway remained slow due to waterlogging at Narsinghpur, Rajiv Chowk, signature tower flyover and Hero Honda Chowk. It was also hit near areas of Mayfield Garden, Basai Chowk, AIT Chowk, Atlas Chowk, CRPF Chowk and Sector 10-A.

The cops, in coordination with the civic body authorities, pumped out rainwater and managed to curb traffic woes in various parts of the city. The cops deployed in PCR, riders, towing vans and earthmoving machines were present at key points, including Delhi-Gurugram expressway.

DCP (Traffic) Virender Singh Sangwan said: “Except a few places, the vehicular movement was smooth in Gurugram. Traffic police personnel have been directed to remain on roads until traffic flow is normalised.”