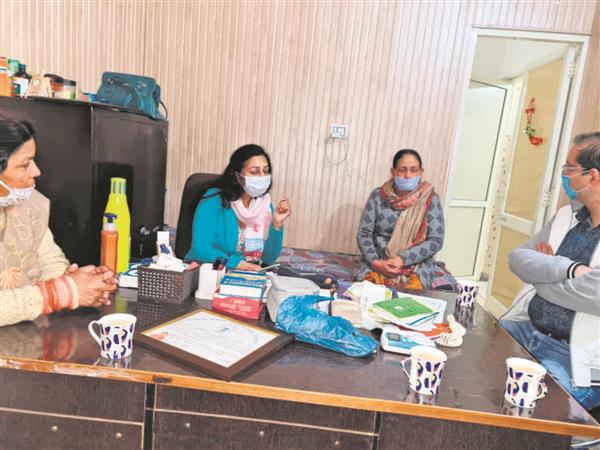 Hisar health team during a raid at a clinic in Ludhiana on Wednesday. Tribune photo

The team got a tip-off that the Ludhiana clinic was luring pregnant women from Hisar and adjoining areas for the test.

The PNDT nodal officer Dr Anamika Bishnoi said they roped in a decoy woman customer and got in touch with the tout for getting the sex determination test done at the Ludhiana clinic.

The decoy customer struck a deal for the test for Rs 35,000. The woman was sent to the clinic today and the Health Department team conducted a raid there. Health officials swooped down on the ultrasound operator when he started the test on the pregnant woman. The operator, however, got a whiff of the raid and fled from the spot, leaving behind the portable ultrasound machine and his car at the spot. He, however, decamped with Rs 29,000, while the remaining amount of Rs 6,000 was recovered from the woman.

Dr Bishnoi said they overpowered the woman tout from the clinic, while the ultrasound operator managed to flee from the spot. The raiding team also seized the MTP kit and other medicines from the clinic which were being run by a quack. She said they took the health team from Punjab with them during the raid and were in the process to get a police case registered against the woman tout and others involved in the illegal activity.