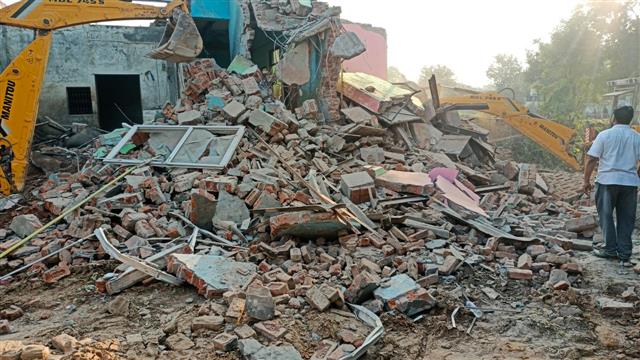 A two-storey house being razed in Bhainsrawali village. Tribune photo

In a crackdown against people involved in drug trade, the Faridabad police on Thursday demolished a two-storey house illegally built by a drug smuggler on agriculture land on the Tigaon-Bhainsrawali road.

According to the police, the smuggler has been identified as Satyadev (54), a resident of Tigaon who has been active in illegal drug trade for the last 12 years, and is involved in crime for the last 38 years. A total of 17 cases are registered against the accused, including 8 for drugs and liquor smuggling, two cases each involving theft and fight and one each on charges of molestation and obscene act.

A drive was carried out by a joint team of the district police and administration. The team was led by ACP Tigaon Sukhbeer and ACP (Crime) Surender Sheoran.

Faridabad police spokesperson Sube Singh said a two-storey house in Tigaon, which was illegally constructed by drug smuggler Satyadev, was demolished using a JCB machine. “In 1984, Satyadev had stepped into the crime world. The greed for money encouraged his involvement in drug smuggling. The illegal property acquired by him on the Tigaon-Bhainsrawali road was used for smuggling drugs. Before the demolishment, he was served a notice by HUDA for violating the law,” said Sube Singh.