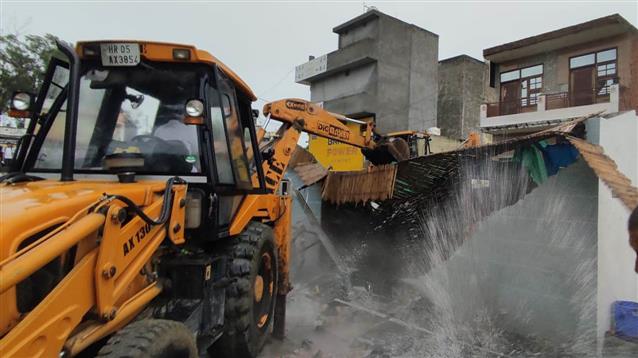 A team of the District Town Planning Department demolishes an illegal farmhouse in Karnal on Wednesday. Tribune photo

In a bid to tighten the noose around unauthorised constructions, the town planning wing of the Karnal Municipal Corporation (KMC) demolished an “illegal” farmhouse in Budhakhera on the Kunjpura road today, which was said to be of “close associates” of the gangsters – Neeraj Punia and Vinod Pannu.

The farmhouse was constructed illegally. We served a notice seven days ago, but when there was no compliance by the owner, we demolished it. RS Bath, DTP

Inspector Mohan Lal, in charge, CIA-2, said the farmhouse was of the close associates of the gangsters. Punia is serving life imprisonment in a murder case and is in the Bhondsi jail, while Pannu is in the Karnal jail. Several cases of murder, attempt to murder and other crimes were registered against both gangsters, he added.

“We have received several complaints regarding late-night parties and other activities at the farmhouse. The farmhouse was constructed illegally. We served a notice seven days ago, but when there was no compliance by the owner, we demolished it,” said RS Bath, DTP. Commissioner Tomar said they would continue the demolition drive against the illegal constructions. He appealed to the residents not to construct buildings without permission.