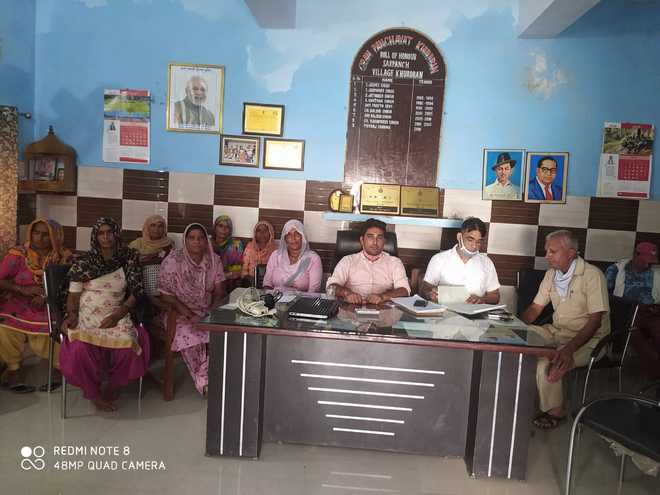 Sarpanch and residents of Khurdban village participate in a gram sabha meeting through video-conferencing. Tribune photo

For the first time in Haryana, a virtual meeting of the gram sabha of Khurdban village of Yamunanagar district was held on Thursday through video conferencing amid the Covid crisis.

The other participants at the meeting were Deputy Commissioner, Yamunanagar, Mukul Kumar; sarpanch of the village Yuvraj Sharma and about 300 people, including panches of the gram panchayat, villagers and officials of the local administration.

Addressing the meeting, Dushyant Chautala said that technology was the future of the country as it was an effective tool to establish contact with maximum people during the Covid crisis.

“During the Covid crisis, it is difficult to hold meetings of gram sabhas. But the sarpanch of Khurdban village has made history by conducting a virtual meeting through video conferencing, paving the way for other villages of the state to conduct gram sabha meetings in the future,” said Dushyant Chautala.

Yuvraj Sharma, sarpanch of the village, said that it was mandatory to hold four meetings of a gram sabha in a year. Therefore, they had decided to hold a virtual meeting through webinar.

He said that discussions were held in the meeting on issues related to income and expenditure of gram panchayat, MGNREGA works being done during the Covid period, plan for holding studies in the government school of the village, schemes of the Agriculture Department, health issues and awareness of Covid.During the interaction with the Deputy Chief Minister, MGNREGA workers demanded that working days be raised from 100 to 150 days under the scheme.Several other demands, including widening of road from Radaur town to Khurdban village, were also raised by the villagers.

Yuvraj Sharma (31), who is M.Tech in Electronics and Communication and has a post-graduate diploma in Panchayati Raj and Rural Development, left the job of assistant professor in MM University, Mullana, in 2016 to contest the election of sarpanch.