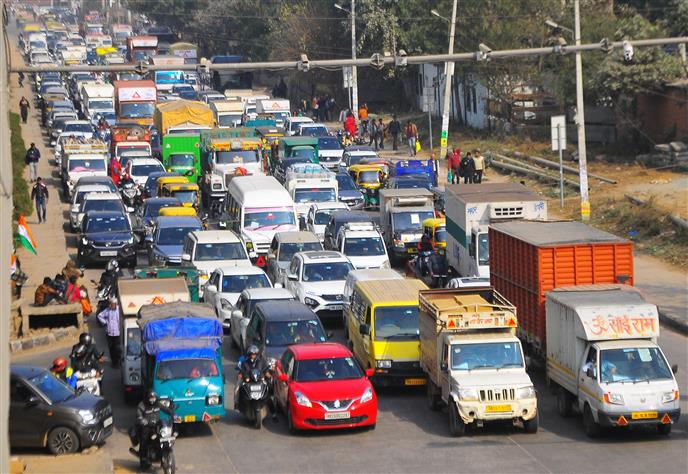 GMDA has ordered to expedite work on a master road to ease traffic congestion in Gurugram. Photo: S chandhan

He flagged the matter at a fifth coordination committee meeting with representatives of departments, including the Municipal Corporation, traffic police and the Dakshin Haryana Bijli Vitran Nigam (DHBVN).

“Inter-department coordination is a must to accelerate the construction of long-pending infrastructural projects. The meeting discussed the pending projects and issued strict instructions to departments concerned to fast track the construction,” said Rajpal.

One of the issues taken up during the meeting was water wastage in Sector 29. The GMDA supplies water to Sector 29 residents in the absence of a booster station there.

The meeting also discussed that tail-end areas of the city were being deprived of water supply because of excessive consumption in Sector 29.

To plug wastage of water and monitor supply, the GMDA CEO directed the Haryana Shehri Vikas Pradhikaran (HSVP) to construct a booster station with the provision of an underground water tank in Sector 29.

Besides, officers present at the meeting were informed that the construction of a master road separating Sectors 78-79A and 78-79 was underway. Once constructed, it will provide easy accessibility and better commuting experience to residents. To expedite the work, the HSVP was told to demolish several structures falling in the right of way of the under-construction road.

The Smart City Division flagged installation of street lights at 40 junctions. It said that once installed, the street lights would support the functioning of close-circuit television (CCTV) cameras.

The DHBVN was directed to ensure round-the-clock power supply at all CCTV junctions.