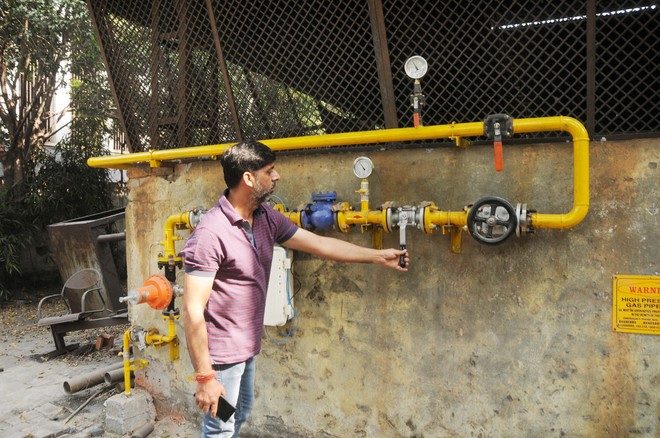 In 2019, the NGT had directed the industries to switch to PNG instead of using existing fuel in NCR. Tribune photo: Sayeed Ahmed

The Karnal industrial area is all set to get the supply of the piped natural gas (PNG), an eco-friendly gas, in the first week of November. The work to lay pipelines from Panipat to Karnal city and further to the industrial area has been completed. Besides, the testing work of the lines has also been done.

In 2019, the National Green Tribunal (NGT) had directed the industries to switch to PNG instead of using existing fuel in the Delhi-National Capital Region (NCR) by August 2019.

Indraprastha Gas Limited (IGL), a gas distribution company, has been assigned the work by the government to lay pipeline for PNG supply in Sector 4, 5, 6, 7, 8, 9, 13 and a part of Sector 13 extension along with industrial area in Sector 3. Apart from this, 10 CNG filing stations were also to be established. The company had started the work in March 2019 and the deadline was fixed as March 2020, but the work was delayed due to Covid-induced lockdown, said an official of the IGL.

Manoj Arora, president, HSIIDC Welfare Association Karnal unit, said the NGT had already issued direction to the industries to switch to PNG and almost all major industrialists had made agreement with the gas providing company.

While work to lay underground pipeline in some sectors has already been completed, it is in progress in other areas. Approval has been granted to lay the pipeline from Ambala Cantonment to Saha.

As per the project report, Ambala will be covered within the next six months and the entire district within eight years under the GAIL project.

“A service regulator and meter valve will be installed for every consumer, who will be charged as per consumption,” said an official, adding that one-time installation charges, security deposit and PNG price would be declared at the time of launch.