Karnal villages do their bit for langar sewa on NH-44 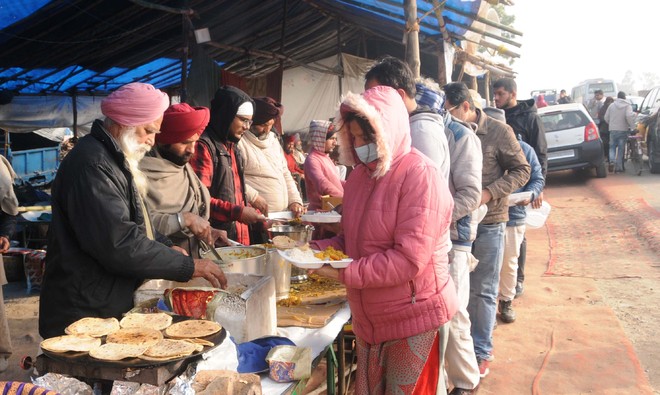 Farmers have been sending dry ration and other essential items to four langar stalls set up in Karnal district. Sayeed Ahmed

Driven by the spirit of benevolence, farmers from the district have been contributing to langar stalls that have come up on the NH-44 and those at the Delhi border. It is a manner of opposing the “black” laws, they say.

Farmers have been sending dry ration and other essential items to the four langar stalls in the district. One is located near Oasis Tourist Complex, while another one is near the National Bureau of Animal Genetic Resources. There are two langar stalls at the Bastara toll plaza.

Darar village resident Deepak Waraich, who is hosting langar near the tourist complex, said: “Initially, only four villages — Darar, Salaru, Kurali and Ramba — contributed to the langar. As the movement gained ground, more villages started contributing. People support the ‘langar sewa’ as per their capacity. Some contribute food items and milk, while some give money.”

Initially, only four villages contributed to the langar. As the movement gained ground, more villages started contributing. Some contribute food items and milk, while some give money. —Deepak Waraich, Darar village resident

Salaru resident Gurinder Singh, who is volunteering at a langar stall, said: “Volunteers serve food round the clock to everyone passing by. Rice, dal, mix vegetable, chapati, and tea are served every day, while ‘jalebi’ and ‘kadhi’ are served on alternate days.”

It is not about food alone. Some persons have been distributing medicines for free. Rajat Khanna, the owner of a local pharmacy store, has set up a stall of medicines on the NH-44. “All kind of general medicines are given to farmers in need. Doctors have also volunteered,” he said.