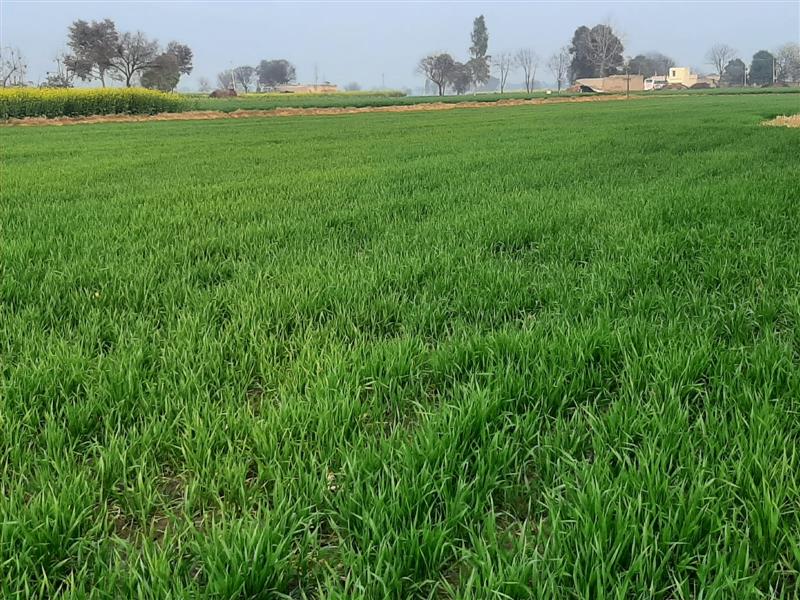 Wheat crop sown in a field in a village of Hisar district on Tuesday. Tribune photo: Ashok Kundu

The light rain that occurred at many places in Haryana, including parts of Hisar, Jind districts, today enthused the farmers as rabi crops like wheat, mustard and gram stand to benefit from the showers.

Light to moderate rain is also likely in some parts of the state on Wednesday.

A farmer of Kabrel village, Anil Kumar, said his wheat crop on 5 acres was in need of irrigation. “Today’s rain has provided the much-needed relief to the crops. Though the wheat crop is already in a good condition, the rain will further strengthen the crop,” he said.

The mustard-growing farmers, who were fearing crop damage due to the persistent frost last week, are also feeling relieved due to the rain. Kuldeep of Nyoli Kalan village, who had sown mustard on 2 acres, said, “Though the crop had suffered damage due to frost, let’s hope this rain would revive the plants to some extent. Rain is expected to neutralise the adverse impact of the frost. But we pray that there is no strong rain or hailstorm as these would inflict a heavy damage on the crops,” he said.

Dr Khichar stated, “Similar weather conditions are likely to remain on Wednesday. The rain, which occurred due to the Western disturbances, will have a positive impact on the rabi crops. The farmers were waiting for the rain for the past two weeks,” he said. The IMD Chandigarh data indicated that Haryana received, on an average, 0.1 mm of rainfall today which was 93% below normal. He said more rains were expected from January 27.

Agriculture experts said though light rain is beneficial to crops, heavy rains or hailstorm could inflict damage on mustard, chana and other crops. The experts said that due to low temperature and high humidity, the wheat crop could be exposed to yellow rust.

Though mustard has suffered damage due to frost, let's hope this rain would revive the plants to some extent. Rain is expected to neutralise the adverse impact of the frost. We pray there is no strong rain or hailstorm as that will damage the crops. — A farmer of Hisar