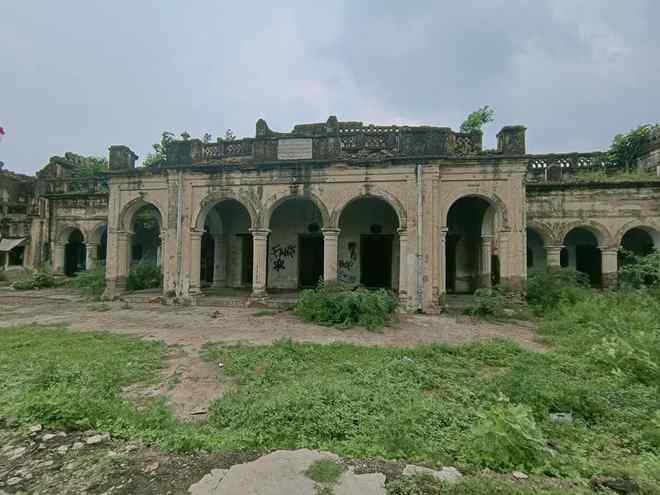 Has connection with Mirza Ghalib

The Loharu Fort is famously known as the “sasural” of acclaimed Urdu poet Mirza Ghalib who was married to Umrao Begum, daughter of Mirza Ilahi Bakhsh Khan, younger brother of the Nawab of Loharu Ahmad Bakhsh Khan.

Decades of official apathy and lack of awareness about its historical importance has turned the Loharu Fort, a precious relic of cultural heritage and three architecture styles, located on the bordering town of Loharu in Bhiwani district into a hideout for anti-social elements.

The Loharu Fort is famously known as the “sasural” of acclaimed Urdu poet Mirza Ghalib who was married to Umrao Begum, daughter of Mirza Ilahi Bakhsh Khan, younger brother of the Nawab of Loharu Ahmad Bakhsh Khan. Though the present generation of residents does not have much knowledge about its history, the culture and architecture lovers maintain that the Loharu Fort is an attraction of heritage experts and should be protected and developed as a tourist spot.

Bhattacharya said the total area of the fort is about 64 kanal and 18 marla (about eight acres) located in the interior of the Loharu town. The fort was built in 1570 by Thakur Arjun Singh as a kuccha mud fort and stayed as such till 1800. The fort witnessed two major conflicts and later was taken control of by the state of Alwar and later became the Paragana under the state of Ferozpur Jhirka, which was ruled by Nawab Ahmed Baksh Khan in 1803. Then the pucca construction of the fort started which is turned out to be an interest blend of three styles of architecture, including Rajputs, Mughals and British style of architecture, stated the notification of the Haryana Government. “The south-wing of the fort contained the Diwan-e-khas and the Sheesh Mahal or The Room Of Mirrors, which has Mughal/Rajput style details. The central part of the south wing contained a large Victorian style audience chamber and banquet hall. The right side of the south-wing consisted of the Zanana Mahal along with the kitchens. The left side of the south-wing was purely Mughal architecture. The east-wing was executed in the Delhi Haveli style which was considered very fashionable at the time and was distinct from the Shekhawati Haveli”, said Bhattacharya.