In Sirsa, private players are buying cotton at up to Rs 9,700 per quintal whereas the government has fixed the MSP at Rs 5,925 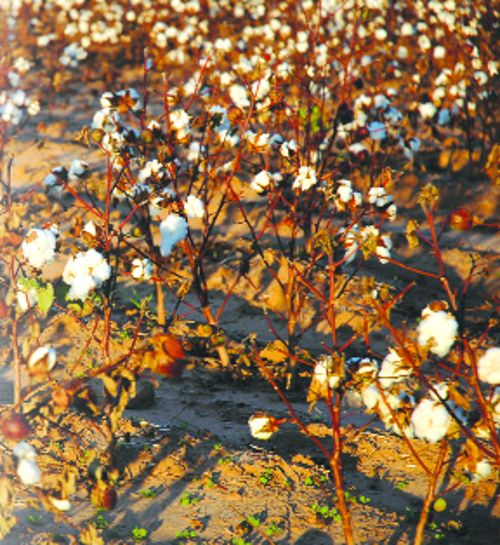 The low cotton yield this season due to excessive rain and pink bollworm attack has resulted in the crop selling at over 60 per cent higher than the minimum support price (MSP). In Sirsa, private players are buying cotton at up to Rs 9,700 per quintal whereas the government has fixed the MSP at Rs 5,925. Mohit Sharma, an official of the Cotton Corporation of India (CCI), said unseasonal rains in September last year followed by pink bollworm attack had not only hit the yield, but also affected the crop’s quality. “International prices too are quite high this time, which is having a bearing on the local market,” he said. Sharma said the CCI hadn’t made any purchases yet, though their infrastructure was ready. “Farmers aren’t selling to us. Based on quality, cotton is fetching Rs 9,000 to Rs 9,700 per quintal,” he said.

Demand shoots up for White gold

Sources said the crop season was almost over and only 16.36 lakh quintals of cotton had arrived in various markets of Sirsa district so far compared to 22.76 lakh quintals last year. An agriculture official said Haryana had around 14.78 lakh acres under cotton this season, which included 5 lakh acres in Sirsa. A girdawari report had mentioned that about 50 to 70 per cent of the crop was lost due to rain and pink bollworm attack.