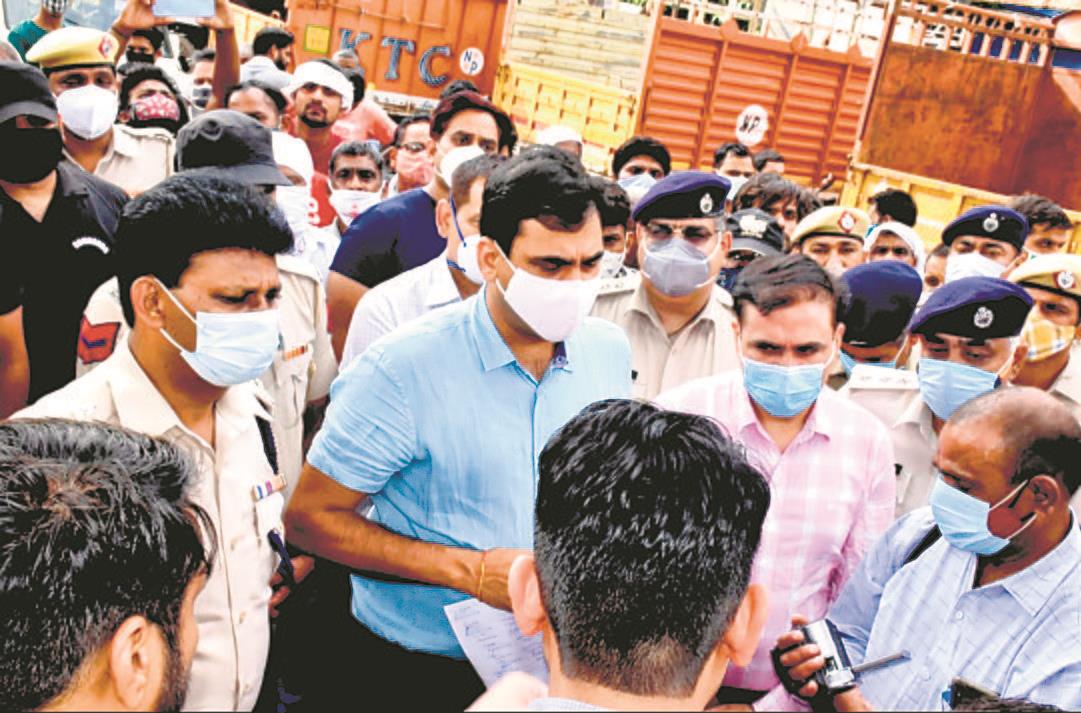 Officials try to pacify victim’s family in Bahadurgarh on Thursday.

A 42-year old man was allegedly burnt to death at the farmers’ protest site near Kasar village on the Tikri border on Wednesday night.

Madan Lal, brother of the deceased — Mukesh Mudgil of Kasar village — claimed that the accused were part of the farmers’ protest.

Kasar residents have demanded that farmers should be removed from the jurisdiction of their village. They accused farmers of creating nuisance in an inebriated state near the protest site.

Enraged, family members along with other villagers disrupted traffic by placing the body on the road outside the Bahadurgarh Civil Hospital for around four hours, demanding the arrest of the accused, a government job and financial aid of Rs 20 lakh for the next of kin of the deceased.

They lifted the blockade after DC Shyam Lal Punia and SP Rajesh Duggal assured them of arresting the accused soon.

The complainant said his brother went to the farmers' protest site on Wednesday evening. Later, someone informed him over phone that protesters had set his brother on fire by pouring oil on him near a petrol pump.

“I called the sarpanch to the spot and took Mudgil to the civil hospital. He disclosed that one Krishan had poured oil on him and set him on fire,” Lal added. Mukesh succumbed to his injuries in the wee hours of Thursday.

SP Rajesh Duggal said initially, a case under Section 307 of the IPC was registered and later Section 302 was added.

Meanwhile, Some videos went viral on the social media, showing the deceased, Mukesh, in a critical condition at the Bahadurgarh Civil Hospital. He was seen disclosing the incident to someone. In another video, he was seen sitting on a structure and answering questions asked by someone. He was also seen sitting in an ambulance.